America’s Exceptional Independence in the Annals of History

America’s 246th birthday is truly something to celebrate in spite of all the turmoil and disarray! God did shed his grace on us, and we would do well to acknowledge it and fully appreciate it once again. As a nation we don’t look so good at the moment, but this too will pass. Our only salvation is if we will work hard to recuperate being “One Nation Under God” again. That is who we were created to be.

It is a fact of history that empires and nations have a life cycle that they all go through. Studies show that there are at least seven stages that all states in the past have gone through. It is amazing to me that with so much confirmed knowledge of these cycles we would be able to create a better civilization, but the opposite seems to be the truth. Where is humanity headed?

In the biblical account, we see that these cycles repeat themselves over and over again. An oppressed people cry out to God for deliverance, he liberates them and blesses them, they obey God’s statutes for a while but then they go right back to their evil ways and the oppression begins all over again. In essence we arrive at the conclusion that we don’t learn from history, nor do we hold firm to the principles that worked. 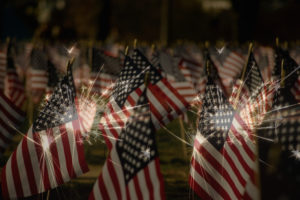 At present all nations are going through some form of cycle. The superpowers like the United States and China are also going through the same cycles and vying to occupy the top position of power in the world. Who will win and what will this final stage be like?

God keeps track of all these struggles and knows that the greatest struggle of humans is how hard they try to separate themselves from his authority and dominion over all of his creation. In Psalms 2:1-4 it says, “Why do the nations rage and the peoples plot in vain? The kings of the earth set themselves, and the rulers take counsel together, against the Lord and against his Anointed, saying, ‘Let us burst their bonds apart and cast away their cords from us.’ He who sits in the heavens laughs; the Lord holds them in derision.”

In this passage, the psalmist clearly describes this struggle of man against God. But it also lets us see who the victor is in the end.

The United States of America exhibited exceptional triumph only because it called upon God to bless its endeavors to establish a new country under his values and principles and God said, okay, let’s do it! How is it that we have not learned from our own history as to what worked and what didn’t and why are we so divided in not acknowledging that it was only by the grace of God that our nation came to be? Have we become like those who rage and plot against God? Is He who sits in the heavens laughing or crying over us? Will we just go down into the trash heap of history into forgetfulness? I pray not.

Let’s not kid ourselves. Let’s get back to God. He is the only way to life, truth, and happiness!