Celebrating Halloween is Dangerous and Deadly

What is the truth about Halloween and why is it celebrated in America? The event comes from the history of Druidism, a religious order among the ancient Celts. Ex-witches and warlocks who have all come to Christ have given corroborating testimonies of this practice and how it is everywhere in our modern culture, especially here in the United States. It is in music, television, fashion, Hollywood, cartoons, and Disney productions, just to name a few. Satanists rejoice that Christians celebrate and allow their children to celebrate Halloween with them even through so-called “fall festivals”.

One of the 37 major indicators of a civilization headed for a fall is the increased belief in the occult. This trend has been increasing in America for a long time and it shows no sign of stopping. In times past, those who dabbled into occult used to hide their practices and activities or present them in a “fun” or “cutsie” way. That is no longer the case. The occult is practiced openly in America and is getting bolder in the demands to be recognized as a legitimate practice in our society.

It is of utmost importance to look into this and be aware of how it dares to enter our lives. We must not be unaware of its tentacles.

The Bible is more than clear on this subject, coupled with history that records the facts and results of participating in these practices should make this subject very clear in our minds as well.

The origin of Halloween 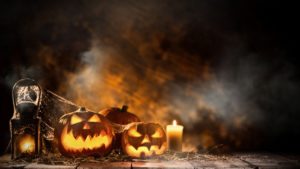 The celebration of Halloween goes back more than 2,000 years. It stems from a pagan festival call Samhain, a pre-Christian Celtic festival. The name means “summer’s end” on the last day of harvest. But it also celebrated the crossing of spirits over into another world. People in France and the UK lit sacrificial bonfires and wore costumes to ward off the evil spirits. Today it has morphed into children disguising themselves and asking for candy, but it has a very broad and dangerous significance. The immigrants helped popularize the holiday in the U.S. The Irish fled their country in the 1840s due to a potato famine and they brought their Halloween tradition with them to the United States. By the 1920s, the holiday started gaining traction and it is now the second most popularly commercialized event here. Christmas is first in the U.S.

The Druids were priests of a dark Celtic religion. They were also referred to as sorcerers and wise men who dabbled in darkness and death. It was known that the Druids drank blood in their rituals and were involved in human sacrifice. In the eve of Samhain, on October 31st, known to us now as Halloween, they would take wicker baskets and fill them with humans and burn them as sacrifices to the god of the dead, “the grim reaper.“ The Druids celebrated Halloween with great excitement because it was said at that time all the wicked evil spirits were loosed to come out of their dark abode to walk the earth and torment humans. The Druids taught the Celts to dress in ghoulish costumes and set out food on their porches, so these evil spirits would not hurt their homes or attack their lives. It was a “treat” so the spirits would not do mischief.

Every time the children chant or cry out “trick or treat” they are repeating and partaking in this age-old festival of death. As the wickedness grew the Druids taught that these small treats were no longer enough and now the townspeople began to bring animal sacrifices and put the heads of the animals on sticks and displayed them to be seen as the sacrifices offered to Samhain, the god of the dead, so the evil spirits would do them no harm. October 31st is when the goddess Diana, one of the major gods, would go into a deep sleep, that as she slept, you could come into great communication with the dead. It was said that the screen between life and death became very thin. As time progressed, the higher gods would then demand human sacrifices.

The Druid priests would dress in gruesome costumes and come to a house in the village and demand a virgin on this new year celebration, October 31st. If a virgin was not produced, someone in your house would die. If by morning, a child was not produced, a blood hexagram was painted with an evil face carved into a squash or pumpkin on the porch and the family would die.

Does this describe something you want your children out celebrating that is so evil and gruesome? Please be aware that even though they may celebrate in jest, there is nothing funny or celebratory about this event; your children will not be exempt from the consequences. It is reported that on Halloween the highest number of break-ins into animal shelters occurs and animals are dissected, murdered, and sacrificed. Also, a wave of homicides and crime are reported. As a Christian, do you seriously think that celebrating this so-called “holiday” even in alternative ways God doesn’t mind and will wink at your participation in this? Leviticus 19:31 says to have nothing to do with necromancers or sorcerers, they are an abomination to the Lord.

Currently, many people do not believe in demons or spirits of evil, however, we must understand that in the universe and in the invisible world there are two sources of knowledge and whether we accept it or not, does not alter this reality.

Witchcraft is a very old practice, and includes an extensive number of variants, rites and uses, among which we can list parapsychology with extrasensory phenomena, clairvoyance, telepathy, precognition (anticipated knowledge), as well as levitation, manifestation of mocking spirits, hypnosis, astrology, numerology, yoga, martial arts and other disciplines that claim to be unified with cosmic forces are also a form of witchcraft, as the Bible affirms.