“For we do not wrestle against flesh and blood, but against the rulers,
against the authorities, against the cosmic powers over this present darkness,
against the spiritual forces of evil in the heavenly places.”
(Ephesians 6:12)

Is Halloween a safe, worthwhile, and a fun holiday? More importantly, should Christians celebrate Halloween or even find an alternate apparently “inoffensive” way to celebrate it like what is being done by many churches called “Trunk or Treat” or “Fall Festivals”?

If not, why are Christians not understanding this danger in their lives that is in plain view if they do celebrate Halloween in any form?

We know that some holidays such as the celebration of Christmas was instituted by Christians to keep Christians from contaminating themselves with the pagan celebration of Saturnalia, held in mid-December, which is an ancient Roman pagan festival honoring the agricultural god Saturn. Because of when the holiday occurred—near the winter solstice—Saturnalia celebrations are the source of many of the traditions we now associate with Christmas, such as wreaths, candles, feasting and gift-giving.

The pagan celebration of Saturn, the Roman god of agriculture and time, began as a single day, but by the late Republic (133-31 B.C.) it had expanded to a weeklong festival beginning December 17. On the Julian calendar, which the Romans used at the time, the winter solstice fell on December 25.

Celebrating the birth of Jesus, the Son of God coming to earth in human form to redeem us from sin and death, is a good thing, regardless of what time of the year it is celebrated for whatever reason it was instituted. Using lights to decorate and to remind us that the light of the world had arrived, is a marvelous idea. Jesus’s coming to earth is transcendental to the human race. 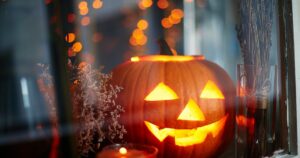 But can the same be said about the celebration of Halloween? What are people really celebrating on Halloween? Is it a practice that is healthy for society? Let’s look at this.

Halloween is a holiday celebrated each year on October 31. The tradition originated with the ancient Celtic festival of Samhain, (sā-win) when people would light bonfires and wear costumes to ward off ghosts. In the eighth century, Pope Gregory III designated November 1 as a time to honor all saints. He made the occasion worse because now all the supposed dead saints would be summoned and celebrated; something that the Bible condemns. Soon, All Saints Day incorporated some of the traditions of Samhain. The evening before was known as All Hallows Eve, and later Halloween. Over time, Halloween evolved into a day of activities like trick-or-treating, carving jack-o-lanterns, festive gatherings, donning costumes and eating treats. But is it that innocent and inoffensive? Let’s look at what it really means.

How important is an eyewitness at a court hearing? That person is very important because they have firsthand information and experience of what they are going to testify about. Ex Satanists like John Ramirez, Jenny Weaver and Chelsea Peat reveal in interviews and on YouTube the dangers to demonic activity that celebrating Halloween opens.

Talking about Halloween, take it from people who used to talk to Satan and practice witchcraft. They say what most of us already know that celebrating Halloween is a very bad idea. On Halloween, some kids will dress up as devils and go trick-or-treating. But these ex-Satanists are warning all people, especially Christians against doing that.

John Ramirez is an ex-Satanist who is now a pastor, and he strongly warns against celebrating Halloween due to what it truly represents. He says, “I breathed, ate and slept witchcraft.” Do you think he might know something about what drives the celebration of Halloween? He is very saddened by the fact that Christians celebrate Halloween, or in an alternative way because it totally betrays Jesus. Ramirez shares these words that came out of the mouth of Anton Lavey, who was the High Priest and founder of the Church of Satan and author of The Satanic Bible. LaVey said, “I want to thank every Christian parent for allowing their child for celebrating Halloween one time a year; the devil’s holiday.”

Jenny Weaver, who was raised in a Christian home but strayed off into using drugs, and then witchcraft after watching a movie of teenage witches who did spells and incantations to have power to control situations and people. Jenny was being bullied at school and wanted to have control. She practiced witchcraft before surrendering her life to Jesus. She also speaks out warning Christians and all people about the dangers of celebrating Halloween, which celebrates the dead and summons them to roam earth and create havoc. She shares that on Halloween, she and her fellow witches would sit around and summon demons to come and give them power. Her house literally became a haunted house due to all the manifestations that started to happen including the demons urging her to become a cutter and hurt herself. She warns that witches use Halloween to recruit, contaminate and harm people through witchcraft. This is a day that witches look forward to. They are on high alert casting spells, roaming around doing harm. It is reported by the authorities that that night there’s more kidnappings, missing persons, more crime, and murders. Halloween is the devil’s play night. She also attests to deceased Anton LaVey’s appreciation for Christian parents allowing their children to celebrate that time of the year.

Chelsea Peat – is another ex-witch that has been delivered from witchcraft and the occult, which she practiced through voodoo, divinations, mantras, Ouija boards, tarot cards, yoga, meditation, etc. she practiced these things as a very young child. At one point she became suicidal, she was sexually immoral to control men, and many other activities of the dark side. She also agrees with the previous people mentioned that the night of Halloween is a very important night for the kingdom of darkness. It is a massive spell night, of incantations and ceremonies. A highly anticipated night for specific purposes.

These people know what they are warning about that the celebration of Halloween is a very dangerous practice because it has to do with the dark side of the spiritual realm we know as witchcraft. Once the door is opened the devil takes full advantage of it. Satan has used witchcraft to prevent people from finding holy spirituality in God alone. He uses witchcraft such as mediums, horoscopes, and games to entice people away from God. The Bible speaks often on the consequences of following idols and falsehoods. We know that Satan is the expert falsifier and can fool anyone that is not wise to his schemes.

Under no circumstances does God approve the use of witchcraft or consider it harmless to any degree and neither should we. Celebrating Halloween is no light matter.