Does God give a real solution for this out-ot-control illegal immigration problem? Yes, he does.

It is accurate to say that all human problems have true solutions if we consult God’s order for creation and all of life. In spite of the disorder and chaos that sin caused, God established a proper order for all things human here on earth. The immigration issue is multifaceted and must be looked at in this way to be properly understood. God’s answer or solution may not be what we want to hear, nevertheless, it is his way, and it is always best this side of heaven.

The story of the human race is a story of continuous migration. To understand this let us go to the beginning, after the fall of Adam and Eve into sin.

When Adam and Eve sinned, they were exiled from their beautiful perfect home (Gen. 3:22-24) and God even put cherubim to guard the entrance to keep Adam, Eve, and their descendants out. Why did God do this? Because Adam and Eve were no longer abiding by God’s rules for living there. Make no mistake; illegal immigrants change the face (identity) and character of a nation for better or for worse that is what world history teaches us.

For the first time we read of God’s concern and instructions for the sojourners (one whose stay is temporary) in the world and from this point on his concern continues throughout the Bible and he sets down instructions on how to view legal and illegal immigration.

At present, the influx of illegal immigrants never seen before in this magnitude is of great concern. Their entrance is mainly coming through the southern border and is being called an invasion with no end in sight. It is estimated that people are coming from over one hundred nations. Finding a true solution has nothing to do with lack of compassion, rather to maintain law and order and to protect the legal citizens. 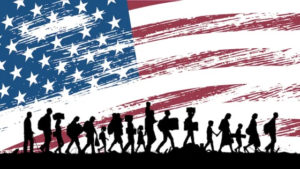 Even though thousands of dollars are needed for each undocumented person who crosses the border and is now in the custody of the Immigration and Naturalization Services, simply throwing money at the problem is not the solution. This has infuriated the citizenry because we are the ones providing the finances for this with no return and this only encourages more illegals to keep coming.

The unresolved illegal situation in this country has been waiting for the federal government’s decision for decades. Of course, the illegals are hoping they will be favored with amnesty, which means legal residency and a path to citizenship. This has been tried before in 1986 with President Ronald Reagan through the Immigration Reform and Control Act (IRCA), and it didn’t work, the problem only got worse because the stipulations and existing laws were not enforced.

The stipulations included to require employers to attest to the employees’ immigration status. The act made it illegal to knowingly hire or recruit illegal immigrants. The act legalized certain seasonal agricultural illegal immigrants, and legalized illegal immigrants who entered the United States before January 1, 1982 and had resided here continuously with the penalty of a fine, back taxes due, and admission of guilt; candidates were required to prove that they were not guilty of crimes, that they were in the country before January 1, 1982, and that they possessed minimal knowledge about U.S. history, government, and the English language. Needless to say, the act failed miserably. Why? Because mass amnesty is not approved by God.

This failed act of 1986 only accelerated the changing face and character of the United States.

When dealing with issues of immigration one must keep in mind the vital aspects of our history and our original design:

We must also keep in mind that the only agenda that really matters is God’s agenda.

Something to note is that every important shift in any country or region and every war has stories of refugees, immigrants, migration, sojourners, and asylum seekers (Genesis 14). In modern wars the victims are civilians, the majority of them are women and children. All must be treated with kindness, mercy, and compassion. But twisting the Scriptures, our Constitution, and our laws to accommodate throngs of illegals and even incorporate them and grant them amnesty is wrong. Having crossed the border and offered short-term assistance is not to be confused with permanent residency status. There is no biblical mandate to forcefully assimilate illegal foreigners.

The Bible does not advocate open borders for people to go into a nation as they please and take what belongs to others, this includes jobs. Illegals should not vote either, they have not earned the right. That right belongs to citizens.

Illegals are lawbreakers. They violate the laws of a sovereign nation when they enter illegally. You will never find legitimate biblical support for that.

Borders are important to God, and this includes private property (Proverbs 22:28, 23:10-11). God owns the world and all that is in it. He knows the importance of borders for people to distinguish the customs and traditions of people. When Israel left slavery in Egypt, God had already pre-determined the land that was to be given to them with borders. These borders were to be respected. Deuteronomy 32:8 “When the Most High gave to the nations their inheritance, when he divided mankind, he fixed the borders of the peoples according to the number of the sons of God.”

Biblical ethics are the highest form of moral law in society for all institutions and individuals. However, there is a difference in justice and mercy and how they are applied. Public policy is more about justice than mercy. When civil government legislates mercy, it creates a mess with terrible social consequences because good justice is diluted.

There are no rights for individuals who cross borders illegally into another’s property to steal regardless of how hungry they may be. No person is a law unto themselves, meaning we cannot make up laws that will violate the well-being of others. Stealing is stealing, breaking existing laws makes one a lawbreaker.

There are other means to satisfied hunger, asking for food, working for food, or any decent action, but never stealing. Christians, have options first to pray for God’s promises of provision in time of need. God’s Word is clear, “you shall not steal.”

Illegals must be treated humanely by giving them medical treatment where needed, feed them, clothe them, and speedily return them to their homeland. If they want to immigrate to the States, they must do it the legal way as millions have done and are doing it. Those who are in line are patiently waiting in the midst of a long process, which can be financially costly. It is not fair nor is it moral to tell those who abide by the immigration laws that they are fools for doing so and that they should have to jump the border illegally.

A nation that rewards lawbreakers will die under the weight of lawlessness. All nations involved must come together to solve their problems and never encourage their citizens to violate the laws.

“When justice is done, it is a joy to the righteous but terror to evildoers.”
(Proverbs 21:15)