Involved Dads Have a Direct Impact on their Children’s Formation

“Train up a child in the way he should go;
even when he is old he will not depart from it.”
(Proverbs 22:6)

Most people will agree that a good mother’s love and care is one of the most precious memories that will be with them throughout their entire life. But equally important is the father’s role, when done right. It cannot be substituted and is greatly missed when he is not involved in his child’s life.

A man enters fatherhood when he impregnates a woman. Fatherhood not only happens when their child is born, it starts from the moment of that fertilization. Fatherhood can also happen through adoption or by marrying or becoming a partner to someone with children, that should be the full commitment. Father is the term for a male parent.

Involved fatherhood is linked to better outcomes on nearly every aspect of a child’s wellbeing. Facts show that cognitive development and educational achievement to self-esteem and pro-social behavior are derived from a good father’s hands-on parenting. 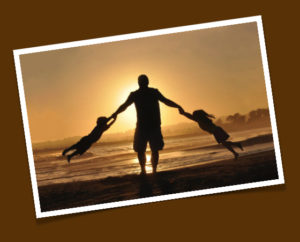 This is why it is sad and tragic that fatherhood has changed over the years.

With increased autonomy of women, trends such as declining fertility, the ever- increasing rate of divorce and remarriage, and childbirth outside of marriage have resulted in a transition from traditional to undefined roles for many fathers. Many fathers are just as confused and unfulfilled as the children who grow up fatherless because they need one another.

What is the importance of a father in a child’s life?

Most men can father a child, but being a dad takes a lifetime. A father’s role in every child’s life cannot be filled by others. This role has a large impact on a child and helps shape him or her into the person they will become. God knew perfectly well what he was doing when he gave children a father and a mother. When understood, it is the best well-adjusted perfect team to guide a child through life.

Fathers, like mothers, are pillars in the development of a child’s emotional well-being.

Children look to their fathers to lay down the rules and enforce them. This gives the children a feeling of security that the father is teaching them what is best for them in every situation to be well-adjusted in life. A hands-on father helps children in their inner growth and strength. He always seeks to be an example in what he is teaching his children so they can learn from his life example not just his words.

Studies have shown that when fathers are affectionate and supportive, it greatly affects a child’s cognitive and social development. It also instills an overall sense of well-being and self-confidence.

Good and responsible fathers greatly influence how a child will relate and cultivate their relationship to our heavenly Father.

Also, fathers influence how we have relationships with people as we grow. The way a father treats his child will influence what he or she looks for in other people. Friends and spouses will all be chosen based on how the child perceived the meaning of the relationship with his or her father.

It is of vital importance that young girls receive security and emotional support from their father, and what a good relationship with a man is like. If a father is loving and gentle, his daughter will look for those qualities in men when she’s old enough to begin considering marriage. If a father is strong and brave, she will relate closely to men of the same character.

Boys on the other hand model themselves after their father’s character. Boys look for approval from their fathers from a very young age. It is a given that human beings grow up imitating the behavior of those around them; that’s how we learn to function in the world. If a father is caring and respectful, the young boy will grow up much the same.

When a father is absent, young boys look to other male figures to set the “rules” for how to behave and survive in the world. We learn by example mostly.

It is high time for society to begin to give fathers their rightful place and emphasize the importance of their role in the lives of their children once again.