If you were asked what is America’s first-protected, most-important, and longest-treasured politically protected right, would you know the answer? The answer to that question is the right of freedom of worship. The rights of conscience is at the top of the list of priorities. The naysayers can deny this all they want but it doesn’t change the fact.

This is evidenced as expressed by the early colonists arriving in America that this is what they were seeking (read the text of the Mayflower Compact). The Mayflower Compact is a formal document drawn up and signed by 41 of the male adults on the Mayflower to commit to for the building of this new colony in the “New World”.

It is interesting to note that the inalienable right the early colonists came seeking is now diminishing in America. A new Gallup Poll reveals that fewer Americans than ever answer “yes” to the question of belief in God.

The poll reveals that 81 percent of Americans answered that they do believe in God. This is down from 87 percent in 2017. 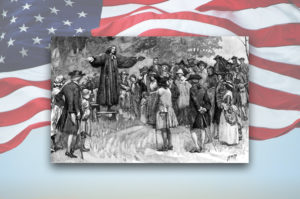 The question is, what is causing this decline of the existential belief in God? Why has this pillar belief in God decreased in every demographic? And are we about to see a total crumbling of our country or will this cause a resurgence of a desire for God like never before?

In this survey, women, people of color, older people, non-college graduates, married people, and people with children were more likely to believe in God than their male, white, young, college-educated, unmarried, childless counterparts. People in the South expressed belief in God at slightly higher rates than Americans from other regions.

Could the decline of belief in God be due to the earth-shattering shifts of doctrine in organized religion? People who are Bible illiterates are confused about who has the truth. They ask, how can God be saying fifty different things to fifty different denominations about the same portions of Scripture? That is a very valid question.

It started to become a trend in twenty-first-century individualists to feel far more comfortable pursuing their own spiritual journeys. When Americans disassociate from organized religion, they don’t all become militant theists. Many of them continue to believe in a higher power and don’t think much more about it. Others mix and match diverse spiritual practices, regardless of if they have any semblance of biblical basis or not. The lines become blurred to the degree that everything that sounds spiritual since they have no solid biblical guidelines, they figure all must be connected even some forms of witchcraft.

Without an accurate biblical compass everyone gets lost. Proof of this is what we now recognize as Social Justice or Wokeness, which progressives say it offers many of the same things religion does: “community, moral certitude, confession, being a part of something larger, ecstatic revivalism, the eternal struggle of good versus evil — and most importantly, meaning and purpose for life.”

Nothing could be further from the truth. Illusive “wokeness” pretends to create an alternative universe than the one established by our Creator and they say it will work the same or even “better”.

Humans are inevitably spiritual beings, so these new beliefs are now being woven into “new” strange religions where people venerate shrines dedicated to thugs who were killed by police, etc. Those who believe that unborn babies must be killed at all costs under the banner of women’s freedoms are willing to even lay down their lives to “preserve” this so-called right, which the Supreme Court clearly declared it never had Constitutional standing, yet over 63 million babies have been slaughtered at the altar of immorality.

Can Christianity still make a comeback in America’s public square? We have a history of Great Spiritual Christian awakenings, the first in the mid-18th century, the latest lasting roughly from 1960-1980 known as the “Jesus Movement”.

Our country’s still relatively high rate of belief in the God of the Bible gives us hope because God’s Word will never return void and will bring about the purpose for why God gave it in the first place. Science, godlessness, and empty philosophies of men can never displace faith in the Almighty. He is the only One that can answer our questions about life, death, meaning and purpose for life and even the hereafter.

This is our living hope.