Let’s Not Play the Blame Game

“You are the salt of the earth, …You are the light of the world… let your light shine before men, that they may see your good deeds and glorify your Father in heaven.…”
(Matthew 5:13-14, 16)

There’s no doubt that our national problems are the result of people’s ideas and decisions. In some form or fashion, we all contribute to the condition of our country because we all are the nation.

Obviously, America is applying incorrect knowledge in most areas of life, it is the only accurate, rational, and practical way to understand what is happening.

When things go wrong, it is easy and expected to begin pointing the finger at the possible culprits. This is the first natural reaction especially when the finger points in your direction. For the most part, we always want to blame people and circumstances for why we don’t perform up to a good standard. But in our failing nation, we are all to blame. 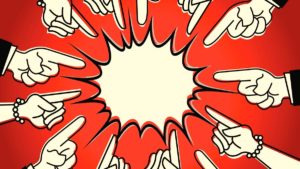 In God’s eyes, it is always the responsibility of his people for the condition of a nation because he has commissioned us to be “salt and light” to a darkened and confused world. Matthew 5:13-14, 16, says: “You are the salt of the earth, but if salt has lost its taste, how shall its saltiness be restored? It is no longer good for anything except to be thrown out and trampled under people’s feet. You are the light of the world. A city set on a hill cannot be hidden… let your light shine before men, that they may see your good deeds and glorify your Father in heaven.”

God’s people are called into making a difference for the kingdom of God in this world. Every Christian individual, ministry, church, institution, and organization that understands this is doing their best to fulfill this commission. Many are calling for more fasting, prayer and personal involvement to their adherents. However, sad to say, too many have been asleep and not perceiving this true calling into making the difference and representing the kingdom of God to a dying world and especially making the difference in our very own nation.

Many in the Christian camp are pointing the finger and saying America’s enemies are the godless secularists that call themselves progressives. But are they? No doubt they are well-meaning and doing their part to bring awareness to Christians for more prayer and asking God for forgiveness and national healing, as well as encouraging Christians to run for office and the responsibility to vote in the coming elections.

I agree that Christians must run for public office at all levels, except it should not just be anyone who claims to be Christian, and this is why: since the forming of the new experiment of civil government in the late 18th century, the majority of the elected officials have professed the Christian faith. Since then, history reveals that not everyone that claims to be of the Christian faith thinks and acts according to biblical principles. How do we know? The outcomes of the cultural conditions tell us so. At present, we have a handful of committed Christians in a rubber stamp U.S. Congress who are unable to turn anything around and mainly seek to serve their personal interests and the interests of their masters who pull the strings, and guess what? The majority of them profess the Christian faith. Only Christians that know and live by the biblical worldview and apply God’s moral absolutes can make the difference for good. It is unquestionable that Christian America must seek forgiveness and pray to the only One that has the power and ability to heal the nation, however, He has specific requirements to answer those prayers. He has always needed human elements that will stand boldly for his truth and righteousness to reign on the earth.

So, the real enemies in America are not the godless secularists also known as progressives. It is the cowardly Christians who have allowed God to be taken out of the political debate and our public square. We must put him back in his rightful place and we can all do that in our sphere of influence whatever it may be, great or small.

No one in this country has allowed the undermining of godly values more than God’s people especially since we are still the majority.

Too many of God’s people in America have believed that neutrality exists, and we should not advocate too strongly for biblical values if we are going to adhere to the First Amendment with everyone’s freedom of expression and belief. That is a partial truth because the other side of that coin is that there are no vacuums, and someone’s ideas and values are going to dominate regardless. The only question is ‘whose ideas’? The beliefs that are implemented influence all of society.

Our thoughts and words are important in expressing what we consider to be real. The challenge has always been who is the ultimate authority that defines reality? In America that ultimate authority was always God, until slowly but surely many decided it was time to dethrone God in America and allowed humanism to rule in his place, and these are the disastrous results.

We must stop blaming the godless for the decadent state of our nation and as believers in Christ accept our responsibility before God and implement it in our service to God and our fellowman.

There are devastating long-term consequences when Christians do not comply with The Great Commission of Mathew 28:18-29.

“When the righteous are in authority, the people rejoice;
But when a wicked man rules, the people groan.”
(Proverbs 29:2)