Losing What Should be Our Nonnegotiable Common Ground

“Give me liberty or give me death!”
~ Patrick Henry ~

There are values in life that should be common ground to all human beings. What’s more, they are nonnegotiable for change from their original meaning and purpose because they are foundational. There are pillars in life that are the base upon which we build the rest of life. They are unmovable or should be anyway. When they are tampered with, we will always get in trouble even if it takes time because the pivot and the momentum toward a wrong direction has been initiated.

The Founding Fathers had it right when they wrote in our Declaration of Independence stating this: “We hold these truths to be self-evident, that all men are created equal, that they are endowed by their Creator with certain unalienable Rights, that among these are Life, Liberty and the pursuit of Happiness.” The first draft said, “life, liberty and property”. 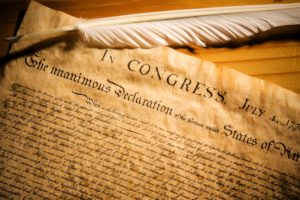 These are the three basic ingredients that should never be disturbed, changed, or infringed upon by anyone, no matter who they are or how powerful we have made them. The fear of God should come upon anyone attempting to change these three main life characteristics into something less than strictly belonging to the individual. Any attempt to alter these values should be met with strong resistance by the citizenry. The value of life, liberty and property is nonnegotiable. These are gifts from God to every person.

It doesn’t matter what political party you belong to our common ground to always defend is life, liberty, and property. Without having control of these, we have nothing, and it is just a matter of time that we become completely enslaved. Surrendering these three pillars of life, is how totalitarian governments are birthed and allowed to create havoc.

The United States is known as the freest nation in all of human history, but it didn’t just happen. Freedom isn’t free, it has always cost bloodshed. The battlegrounds of our country are soaked with the blood of the brave men and women that have fought and laid down their lives to hand down a free country where our liberty can be respected at all times from generation to generation. They fought knowing they may lose their lives in the process, but they were willing because humans were not created to live oppressed and in bondage.

The famous words of the great patriot, Patrick Henry when he said, “Give me liberty, or give me death”, ring true in the heart of every person. Especially those who have already experienced true freedom. They never want to allow themselves to fall into slavery. The main idea of Patrick Henry’s expression came when he knew it was time to fight against the tyranny of Britain upon the early colonies. With his words, Henry is strongly expressing that he would rather die than live without liberty.

Losing your life to defend freedom is one thing, but it’s quite another thing to lose your life in an act of violence like we are seeing out on the streets of our city, and many times even in our homes at the hands of violent intruders. That activity seems to be increasing exponentially these days as people get more desperate and become lawless. But these acts are part of the anarchy that has been unleashed in the last two years where the effects of the pandemics we are going through are being blamed. But those are just excuses to get away with criminality or take revenge on what is perceived as being taken advantage of or treated unjustly by others.

There is common ground that all sane humans should be in favor of defending at all costs. They are Life, Liberty, and Property. Without these three unalienable rights given to us by God, we have nothing. These are nonnegotiable.

Without a doubt, our civilization faces challenges unprecedented in our lifetime. It is up to us to defend what we should never allow others to tamper with. It will cost us everything we have but our country, our family and our heritage is worth fighting for. Let’s tell the bullies in our society who are trampling on our God-given rights that these rights are not negotiable.