“One Nation Under God” or “A Nation Gone Under”?

“If we ever forget that we are One Nation Under God,
then we will be a nation gone under.”
~ Ronald Reagan ~

In August 1984, while addressing an ecumenical prayer breakfast in Dallas, President Ronald Reagan spoke these words: “We establish no religion in this country, nor will we ever. We command no worship. We mandate no belief. But we poison our society when we remove its theological underpinnings. … Without God, there is a coarsening of the society. And without God, democracy will not and cannot endure. If we ever forget that we are one nation under God, then we will be a nation gone under.”

Truer words were never spoken. Yet, that was thirty-eight years ago; we are worse off now as a nation than we were then.

Many of us have been praying and voting in elections for the candidates that we believe would take us in the right direction, to no avail. We have done this for many decades in hopes of seeing a turnaround in America toward a godlier nation. One nation under God, if you will. But the opposite happens. We just become a more immoral and depraved nation and drag the world along with us because, sadly, the world wants to imitate us in many ways.

Matters of life or death are not to be trifled with and should be dealt with sooner rather than later. A young girl of 27 years of age was diagnosed with cancer and died the next day. Do you think she would have liked to have known long before then about the danger her life was in, but she did not know it? Let me ask you a question. What would you have liked to see happen if you were in her position? Exactly! That brings me to the point of this writing. Our wakeup call (diagnosis) as a nation has been sounding for a long time and our prognosis is dire. Why are we not heeding? God plays for keeps and so should we. He will not be mocked by anyone, not even the United States of America, the greatest, most powerful nation that has ever existed. We will not be the exception.

America was God’s design and He willed and guided its formation. Of this there is no doubt. 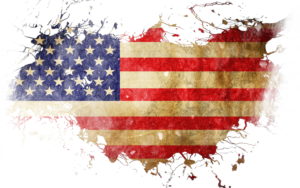 John Jay, our first Chief Justice, wrote in Federalist Paper No. 2, “With equal pleasure I have as often taken notice that Providence has been pleased to give this one connected country to one united people–a people descended from the same ancestors, speaking the same language, professing the same religion, attached to the same principles of government, very similar in their manners and customs, and who, by their joint counsels, arms, and efforts, fighting side by side throughout a long and bloody war, have nobly established general liberty and independence. This country and this people seem to have been made for each other, and it appears as if it was the design of Providence, that an inheritance so proper and convenient for a band of brethren, united to each other by the strongest ties, should never be split into a number of unsocial, jealous, and alien sovereignties.”

The Christian godly heritage of this country was a very special gift from God to all of us who were born here and live here, and I dare say even to the world. It is a heritage that we have squandered and are in danger of losing forever, unless each citizen who loves God and country wakes up and accepts his/her personal responsibility before God and this fine nation that we were given to care for and pass on, but it is slipping through our fingers. We have no one to blame but ourselves.

American Christendom needs a more active and bolder move toward standing against sin in our nation and taking it back to our biblical foundation. We must never forget that our founders had a biblical foundation and based our form of government with those principles and that is what God could bless and did bless. It is time to admit that we are far removed from that foundation and our building is crumbling rapidly. We are already in a precipitous decline.

Recently, I have decided to do more and add to my prayers, phone calls, and emails a letter writing campaign to reach out to Christian leaders and politicians that have access to people that will listen to their counsel and also to other Christian leaders and politicians in hopes they will hear the clarion call to be bolder against sin in our nation. We cannot merely be uncomfortable with the direction it has taken and complain about it. Talk is cheap and easy to come by. We must do more in hopes to plant the seeds that will cause the turnaround in God’s direction that we so long for. I want to also awaken this hunger in all of you dear readers.

Decades back it became unpopular to speak against sin from our pulpits and broadcasts for fear to not offend people and it was decided to offend God instead by becoming more lenient and allowing sin to grow and thrive even in our Christian congregations.

This is why Ronald Reagan’s words thirty-eight years ago are more urgent now than ever. “If we ever forget that we are One Nation Under God, then we will be a nation gone under.”