Only Those Who Are Childlike Can Encounter God

“I thank you, Father, Lord of heaven and earth, that you have hidden these things
from the wise and understanding and revealed them to little children”
(Matthew 11:25)

In the context of this passage, Jesus has just finished condemning three towns in Galilee who witnessed him perform many miracles and deliver powerful preaching. But despite seeing the power of God so miraculous and unprecedented with their very own eyes, the people in those towns did not repent of their sin let alone believe that Jesus was the Messiah (Matthew 11:20–24).

Why is it that even seeing such miraculous manifestation of the power of God those who witnessed this failed to believe in Jesus? It is basically that when people think they are wise and knowledgeable in their own eyes, pride sets in and prevents them from knowing God. Also, they don’t think they need God because they have it all figured out and that gets in the way of seeing what is so plainly before their eyes. Jesus said, you have revealed these things to “little children”. Why is that? It is because those who are childlike are free from bias. Those who are childlike are ready to believe. Children have that blessed quality that as people grow older, they lose it. Sin hardens the heart and blinds the understanding. 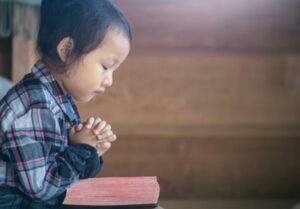 In the middle of addressing the crowds, Jesus thanks the Father for having hidden “these things” from the wise and understanding. Does Jesus really not want God to reveal his truth to these people? More importantly, does the Father not want everyone to understand his truth and actively participates in keeping it from them? Absolutely not! What he is saying here is that the truth cannot be understood by those who already think they are smart according to the world’s standards, or at least according to themselves. Instead, the Father reveals the hidden truth to “little children.”

What are “these things”? The invisible realm is more real than the physical realm that we can see, touch, and feel. In the realm of God’s truth there are things that seemingly should be obvious but people who are already “wise” in their own eyes get blinded by their ego and miss this essence.

When someone’s heart is closed, not even the most outstanding miracles will really cause him to believe. In Luke 16:19-31, we have a perfect example of this. Jesus told a parable of a rich man and a poor man named Lazarus. They both died and Lazarus was comforted but the rich man was in torment and wanted Father Abraham to send Lazarus to preach to his five brothers so they wouldn’t go to that place of torment also. But he was told in vv.2 9-31: “They have Moses and the Prophets; let them hear them.’ And he said, ‘No, father Abraham, but if someone goes to them from the dead, they will repent.’ He said to him, ‘If they do not hear Moses and the Prophets, neither will they be convinced if someone should rise from the dead.’”

In the context of Matthew 11 which we are referencing above, Jesus displays power that can only come from God—power to raise the dead and heal all manner of illnesses and cast out demons with a word—it should have been obvious to those seeing all those great works that Jesus must be the Messiah. Why would anyone not believe that?

Those who think they are wise and understanding in this world tend to overestimate the value of their own minds. Intelligence comes with the temptation to excuse away and rationalize anything a person does not like. When people feel they are self-sufficient they can fool themselves into thinking they need nothing and no one else—not even God. So, in the passage of Matthew chapter 11 these skeptics simply decided Jesus must not be the long-awaited Messiah because he didn’t fit the mold of him in their minds, not even because they witnessed so many outstanding miracles.

God does not hide what should be obvious from those who are arrogant. They simply choose not to understand.

Becoming childlike means being open to learn truth especially from God. God the Father reveals what is obviously true to people deciding to possess the purity of childlike faith. More on this is found in Matthew 18:1–4, “At that time the disciples came to Jesus, saying, ‘Who is the greatest in the kingdom of heaven?’ And calling to him a child, he put him in the midst of them and said, ‘Truly, I say to you, unless you turn and become like children, you will never enter the kingdom of heaven. Whoever humbles himself like this child is the greatest in the kingdom of heaven.’”

Coming to God with the confident trust of a child is precious in God’s eyes.