Patriotism in America is Increasing and Decreasing Simultaneously

“For we do not wrestle against flesh and blood, but against the rulers, against the authorities, against the cosmic powers over this present darkness, against the spiritual forces of evil in the heavenly places.”
(Ephesians 6:12)

Patriotism is the love and loyalty to one’s country. A good citizen is a good patriot. It is common knowledge that an attempt to high jack our country is in full force and each citizen must decide what side they want to fall on. In every struggle or war there are three basic positions to take. Those who are in favor of the objective, those who are against, and those who are on the “fence” waiting to see who will win and then they will join the winners.

The greatest movement in America right now is an obvious time of definition. While a strong longing to restore the original design of our nation is rising in many, for others the obvious contempt for the original design is increasing and manifesting in many despicable ways to change it into what we are not and have never been. 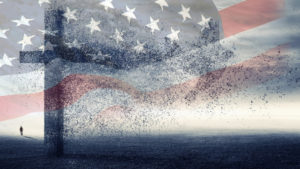 A strong moral, ethical and cultural tug-of-war is raging all across our country, which in reality is a spiritual war, and the time for taking a stand has come for us all—no exceptions. Since America’s original design was established by biblical Christians, it is biblical Christians that have the greatest responsibility to restore the godly foundation that gave us our greatness like no other nation in human history. Only fools would deny this fact.

In the “BIG” war in the universe that was ignited by Satan against God, God crushed the devil through the redemptive work of his Son Jesus Christ, but Satan still refuses to admit defeat. God on the other hand, this side of Jesus’s triumph, is giving us time to also defeat Satan and put him underneath our feet so there will be no doubt who the Victor is in this “BIG” war. It will prove to Satan that even us human beings, in frail bodies that have to fight against sin constantly, through the power of God can also defeat him at every turn. This will forever declare God the victor and Satan the loser for all eternity. At this time God is giving us the opportunity to be included in his plan that is sealed by the death, burial, resurrection and ascension of Christ, our Savior and Lord.

The “anti-Christs” are increasing in boldness in every sphere of our society. The audacity and aggression are clearly out in the open. Even a movement in public schools to promote after school “Satan clubs” to counterattack the long-standing Christian “Good News Clubs” is growing in forcefulness. Plus, all the other filth and hatred for our country being forced upon the hearts and minds of our children that is going on. If this is not a wake-up call for Christian parents to engage in stopping the onslaught on their children’s soul, I don’t know what is.

Bottom line, this spiritual and cultural war raging in our country is forcing us to take a stand, are we for God or against him. People are not our enemy. Our real enemy is Satan himself and his cohorts.

“For we do not wrestle against flesh and blood, but against the rulers, against the authorities, against the cosmic powers over this present darkness, against the spiritual forces of evil in the heavenly places.”
(Ephesians 6:12)