Reinstating the Declaration of Independence

“Let us raise a standard to which the wise and honest can repair;
the rest is in the hands of God.”
~ George Washington ~

The United States of America has gone the full circle since the original declaration of independence was declared from Great Britain in 1776. The difference is that now we are our own oppressors. It is more than obvious that we must push the reset button back to the original foundation of this country with the principles that worked, and that God could bless.

To reinstate means to restore to position, to bring back and reintegrate. The spirit and values in the text of the Declaration of Independence are priceless and they should be brought back immediately. Let us do exactly what the George Washington quote above advises. 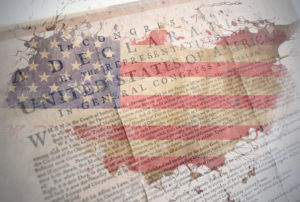 To save and restore America, it is imperative that we restore and raise once again the standards that guided us in the beginning of our founding because we have obviously lost them. Precisely, what the founders warned against is what has happened to America. They established that ALL men are created equal and the color of one’s skin or their station in life should not determine their worth and the respect owed them.

The founders warned us against electing immoral people, yet that is exactly what we have done. They warned against big government and we have ignored their warnings and created this monstrous, oppressive, overreaching, suffocating governmental machine that now borders on being tyrannical. If the control of the Congress with all the newly elected leftist leaning elements, including the presidency, is any indication of where we are headed, we are doomed to become a full-blown Marxist state. That is not an exaggeration, but it would not happen without bloodshed because red-blooded Americans would not go down without a fight. Hopefully, we will be sane enough to use the processes in place to make the changes needed legally and in good order, but we must admit at this point, emotions are running high. Which is why it is urgent to reinstate the honest and cordial spirit of the Declaration of Independence in the justice we seek to right this ship, and most importantly, in “appealing to the Supreme Judge of the world for the rectitude of our intentions.”

George Washington was right in declaring, “Let us raise a standard to which the wise and honest can repair; the rest is in the hands of God.” Let God be our Lord again!

Let us do our part and God will do his. He doesn’t know how to fail, and he is faithful to what he has declared “Blessed is the nation whose God is the Lord.” (Psalm 33:12).