Roe is History, Now What?

“When the righteous are in authority, the people rejoice,
but when the wicked rule, the people groan.”
(Proverbs 29:2)

A momentously, colossal event has happened in America on June 24, 2022! Roe v. Wade, the Supreme Court ruling that legalized abortion in this country has been overturned! It was a ruling passed down by wickedly intended godless men who laid down a snare and caused our nation to groan for 49 years and over 63 million unborn babies to die!

The Dobbs v. Jackson Women’s Health Organization case has been set in history because God finally answered our prayers to eradicate this scourge upon our nation.

Though we hoped it would happen in our lifetime it still spun our heads when it finally did because it happened so fast where we expected to continue on a long-drawn-out knock down fight as we had for 49 years—but now it is here. A great wrong has been righted. There is no constitutional right to abortion. We knew this all along, but it needed to be reversed by the right governing body. The issue now goes back to the states to decide its legality. At long last, the control returns back to the people to decide the protection of life.

We thank the justices for upholding the true text of the Constitution. May this set a precedent of no more invented penumbras or emanations in the U.S. Constitution. The court reversed this ruling that was wrong from the beginning.

The black people alone in our country have lost 19.1 million of their precious babies to abortion. In July 2018, the Wall Street Journal reported that in New York City, thousands more black babies are aborted each year than are born alive. Can this be called genocide? When the Supreme Court decided Roe v. Wade in 1973, polling showed that blacks were less likely than whites to support abortion. What has caused the shift? 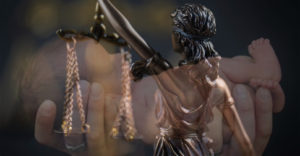 History shows that even their most outspoken black pro-life leaders at the time like Jesse Jackson, who once called abortion “murder” abandoned his pro-life stance to run for president in 1984, and leaders of black civil-rights organizations today are joined at the hip with abortion-rights proponents such as Planned Parenthood. Overturning Roe is a victory for black people since the black population is being greatly diminished because of Roe. All babies deserve to live.

It is more than evident that America needs to reclaim and rebuild its biblical foundation if it hopes to save itself.

John Adams, our second president, while addressing the Massachusetts Militia on October 11, 1798, said the following excerpt:

But should the People of America, …which assumes the Language of Justice and moderation while it is practicing Iniquity and Extravagance; and displays in the most captivating manner the charming Pictures of Candour frankness & sincerity while it is rioting in rapine and Insolence: this Country will be the most miserable Habitation in the World. Because We have no Government armed with Power capable of contending with human Passions unbridled by morality and Religion. Avarice, Ambition Revenge or Galantry, would break the strongest Cords of our Constitution as a Whale goes through a Net. Our Constitution was made only for a moral and religious People. It is wholly inadequate to the government of any other.

God equipped this outstanding country with precisely the right tools to become the most prosperous nation in all of human history, no person(s) can take credit for what this country became except those who at the time of its formation obeyed the laws clearly delineated in—THE BIBLE. God’s Holy Word that instructs all people in the way to right living.

The Constitution showed the way clear that there is no constitutional right to kill innocent life that has been called abortion. This is in accordance with God’s Holy Word in the Sixth Commandment recorded in: Exodus 20:13 “You shall not murder.”

After Roe, now what?

The fight against abortion has been consistent in many ways. One of those consistent ways is the annual celebration of the March for Life in Washington D.C., which started on January 22, 1974, a year after Roe v. Wade was passed, with an estimated 20,000 supporters in attendance. Initially it was a one-time event in hopes that the Supreme Court would reverse Roe immediately a year after its ruling. When that did not happen, Nellie Gray, its founder, took steps to institute the rally as a yearly event until Roe v. Wade would be overturned. The march has grown exponentially. It has been a grassroots anti-abortion activists march. This pro-life movement has always clashed with modern radical feminism. Abortion has been, in the words of North Carolina Senator Jesse Helms, an “American holocaust.” There is no other way to accurately describe it.

Pregnancy is not a disease. Children are a blessing from the Lord.

On January 24, 2020, President Donald J. Trump became the first U.S. president to attend and speak at the March for Life. President Trump was also very instrumental to nominate 3 pro-life justices to the Supreme Court in only one presidential term. Without those pro-life justices overturning Roe v. Wade would not have been possible. This is outstanding! Upon the announcement by the court, Trump said, “God made the decision.” Indeed, he did!

Adoption is the answer. The pro-life citizenry should open their minds and hearts to adoption in huge numbers.

We thank the Lord that we finally have a court with majority willing to stick to the text of the Constitution and godly values. Thank you, Lord! Now let’s get to work friends!

CHRISTIANS have to prove pro-abortionists wrong by manifesting our real love for all of life not just against abortion. This cannot be a political issue.