“The baby leaped in her womb”

“When Elizabeth heard the greeting of Mary,
the baby leaped in her womb”
(Luke 1:41)

If we truly want to arrive at truth on any given subject, especially on the non-negotiable areas of life that absolutely need to be so defined very clearly, we must consult the Bible—God’s holy Word—our life manual. God has not left anything important out of his Word. It is there for us to consult.

The topic of abortion has always been a very hotly debated subject and even more so these days with the case of Dobbs v. Jackson Women’s Health Organization that is before the Supreme Court at this time. This case is evoking very strong arguments and we must know what side of the issue we fall on. No one should be on the fence on this subject.

Since the decriminalization of abortion was announced here in the United States on January 22, 1973, 49 years have transpired at this moment and the question of the beginning of life has been very debated when it really shouldn’t be.

Consider these examples in God’s Word regarding the personhood of each human even in the womb.

In the message the angel told the virgin Mary, the earthly mother of Jesus chosen by God to carry the Savior conceived in her womb by the Holy Spirit, was also told something else of great importance. Mary was told that her cousin Elizabeth, who had been barren, in her old age was now six months pregnant. That was very miraculous too because Elizabeth’s son would be used of God mightily to prepare the people for the coming of Jesus! The instructions were to name him John. He became John the Baptist. He was not conceived supernaturally by the Holy Spirit like Jesus, but he would be very key to God’s plan of introducing Jesus. Mary decided to go visit her cousin Elizabeth. 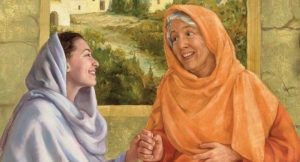 In the gospel of Luke 1:39-41 it says, “In those days Mary arose and went with haste into the hill country, to a town in Judah, and she entered the house of Zechariah and greeted Elizabeth. When Elizabeth heard the greeting of Mary, the baby leaped in her womb. And Elizabeth was filled with the Holy Spirit.”

Notice the writer Luke, who was a medical doctor, says “the baby leaped”. In the original the word he used is the word to say baby. Why did he use the word baby? Because it is a baby no matter what the naysayers insist upon calling it. It is a baby.

Pay real close attention regarding when life begins. The pro-abortion lie is that it is ONLY a clump of cells in the mother’s womb therefore, that “clump” can be disposed of by the mother’s choosing. From God’s perspective this is wrong!
Here we see two pregnant mothers, each baby in their mother’s womb, clearly perceiving each other and even reacting to the presence of the other. In the womb, John the Baptist recognized the Savior of the world and in his way acknowledged and worshipped him. Both babies had been predestined by God to fulfill very specific roles. Both were named even before they were born, and their parents given very specific instructions as to who those babies were.

God knows us even before we are conceived in our mother’s womb; how much more once we are conceived. To the prophet Jeremiah God said this when he called him: “Now the word of the Lord came to me, saying, ‘Before I formed you in the womb I knew you, and before you were born I consecrated you; I appointed you a prophet to the nations'” (Jeremiah 1:4-5). Clearly our personhood and mission in life are present at conception.

Another powerful example of how life begins at conception and personhood is what the Psalmist says in his conversation with God in, Psalm 139:13-16, “For you formed my inward parts; you knitted me together in my mother’s womb. I praise you, for I am fearfully and wonderfully made. Wonderful are your works; my soul knows it very well. My frame was not hidden from you, when I was being made in secret, intricately woven in the depths of the earth. Your eyes saw my unformed substance; in your book were written, every one of them, the days that were formed for me, when as yet there was none of them.”

According to God’s Word there is no doubt that life begins for us at the very moment of conception. A baby in the womb is a baby not anything else.

If you are not you committed to the sanctity of human life you should be. Your convictions should be driven by God’s Word, not by cultural pressure or the trends of the day, or by your own painful experience.

It is time for all of us, or at least the majority, to get on the same page on this issue and settle once and for all. Let the little ones have their opportunity to enjoy life.