The Importance of the U.S. Supreme Court

Alexander Hamilton once described the judiciary as the least dangerous branch of government since it controlled no armies and lacked spending power. The Judicial Branch is established under Article III of the Constitution. It was created to be the weakest of all three branches of government. Each branch has its own characteristics, but what distinguishes this branch from other two is that Judiciary is passive. It cannot act until someone brings a case in front of them.

Is the U.S. Supreme Court still the least dangerous branch? Judging from some of its decisions handed down in the last fifty-nine years that have drastically changed our culture for the worse, can we still say it is the least dangerous?

How important is the Supreme Court of the United States? Just think about the rulings it as passed down that have changed our lives very significantly. Several decisions of the Supreme Court have altered the order of life as God has established it and our value system and that has greatly impacted our culture.

When did God die and delegate to the Supreme Court the authority to alter his order on life such as in the Roe v. Wade ruling of January 22, 1973, where the unborn lost their right to life? Or what about how on June 26, 2015, the U.S. Supreme Court struck down all state bans on same-sex marriage, legalized it in all fifty states, and required states to honor out-of-state same-sex marriage licenses in the case Obergefell v. Hodges. On what authority? 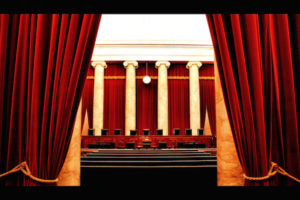 What happened to the cultural landscape of our country since then? It began to turn our country upside down. Things have never been the same since. The value of life was usurped by the court and everything else was traded for a lesser quality of life. We did what the prophet describes in Isaiah 5:20-21, “Woe to those who call evil good and good evil, who put darkness for light and light for darkness, who put bitter for sweet and sweet for bitter! Woe to those who are wise in their own eyes, and shrewd in their own sight!”

These changes have even affected justice in the land where it used to be upheld above all cost. Crime began to no longer receive the punishment it required, and we became lawless and set us down the path of a slippery slope of immorality. Proverbs 17:15 says, “He who justifies the wicked and he who condemns the righteous are both alike an abomination to the LORD.”

Clearly with these Supreme Court rulings we dethroned God from America.

After the June 17, 1963, ruling the Wall Street Journal commented that atheism was now the one belief to which the state’s power will extend its protection.

With these decisions, the court gave preferential status to atheism over belief in the God of the Bible throughout the nation.

The U.S. Supreme Court decisions were not unbiased or neutral. They alone determined to erase prayer and the Bible in public education, which was the glue that held it together for over a hundred and fifty years. They could have been impartial in their ruling by declaring that no student should be forced to pray or read the Bible, that would have been objective, unbiased, and balanced. But instead, they chose the broad stroke and did away with all of it.

Christians were a large majority in the nation, and they just folded, as if God had spoken. Christians are still the majority in this country. What are we doing to block or reverse rulings that disrespect our Creator?

America changed with those rulings, and sad to say, not for the better. We have been reaping the fruit of those bad seeds ever since and it only gets worse by the day.

William Jeynes, an education expert and professor at California State College in Long Beach and a senior fellow at the Witherspoon Institute in Princeton, N.J., spoke at the Heritage Foundation in D.C. in August 2014, on how removing the Bible and prayer from public schools has caused a serious moral decline. He said:

One can argue, and some have, that the decision by the Supreme Court – in a series of three decisions back in 1962 and 1963 – to remove Bible and prayer from our public schools, may be the most spiritually significant event in our nation’s history over the course of the last 55 years,

Since 1963, Jeynes said there have been five negative developments in the nation’s public schools:

“So, we need to realize that these actions do have consequences,” said Jeynes, “When we remove that moral fiber — that moral emphasis – this is what can result.”

This can all be reversed if God’s people lead the way.