The Possible Nearness of WWIII

The world has always been in social turmoil, and it goes through cycles from bad to worse and even to armed conflicts, which produce a significant loss of life. The more weapons of warfare are perfected, the greater devastation they cause.

According to Stéphane Courtois’ editor of The Black Book of Communism: Crimes, Terror, and Repression, he documents the horrors that resulted of mass murders including the human-made famines. According to the records stated in the book, no less than 94 million people lost their lives. Political ideas founded in misconceptions of how life should be, always lead to horrifying outcomes. Just this past week, we saw horrifying videos of how people in Shanghai are being padlocked in their homes and apartments without proper food or water due to pandemic measures, their totalitarian government claims. We heard their desperate cries and protests en masse and sadly, people jumping from their high-rise buildings to their death which they preferred to rather than living under those conditions and watching themselves and their family starve to death.

People are beginning to pay more attention to the unavoidable reality of the world’s violent condition. The news reported the ongoing massacres of Christians by the Islamist Supremacists on Palm Sunday in Egypt where they bombed two Coptic Christian churches. The Islamists claim they will dominate the world, so they continue their attacks the world over. Iran, with its brand of Islam, sees itself as the one who will usher in the destruction of the world that will make way for their long-awaited Shiite messiah, the 12th Imam, who will implement peace and prosperity. We must be vigilant; Iran is the leading sponsor of terrorism in the world. 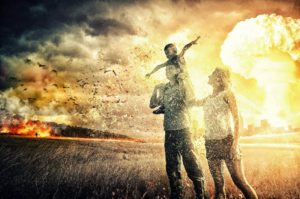 North Korea’s leadership is obsessed with their nuclear weapons and ballistic missiles that will make them relevant in the world. Now, with the third member of the family dynasty of dictators who wants to outdo his grandfather and father in the atrocities they committed, has become more dangerous. Kim Jong-un threatens to attack the U.S.A., South Korea, and Japan. He has made everyone nervous, and the Chinese are no longer silent bystanders.

What can we say about Russian President, Vladimir Putin, who sees his world stage leadership threatened and is lashing out, most recently in Ukraine. What is Putin’s next move? Will he bluff his way by threatening nuclear war with the United States and Europe? Or is he willing to show the Russian people and the world what a tough guy he is and make a move that consolidates his desire to be crowned the next Czar by going to war?

People will continue to ask if the apocalyptic worldview is going to blow us all up. The concern is valid. It is one thing to give campaign promises and express the desires that a candidate hopes to accomplish and quite another thing to be seated in the Executive Office and see the world from another perspective other than from a distance. To be an effective leader in the world a person needs to develop the mind of Christ (1 Corinthians 2:16) to know what to do with precision and avoid costly mistakes. No, I’m not joking it is a proven fact by those who have learned that truth. 1 Corinthians 2:16 says, “For who has understood the mind of the Lord so as to instruct him? But we have the mind of Christ.” Having the mind of Christ for all of life is guaranteed success.

For anyone affirming that the outcome of the present climate of war cannot be predicted, they are missing a key ingredient: HISTORY! There is no better guideline to reveal what can be expected. Should the present world’s moral and spiritual decay continue to increase, it is not difficult to know what is on the horizon. It is as sure as the seasons of a year will change and we know what to expect, so it is with human behavior. We should just not pay attention to the belligerent nations; rather we should focus on understanding what leads to war.

Christians, that are waiting for the world to go up in flames so Jesus can return, need to take a good look, and understand how the God of the Bible deals with nations that reach the permitted level of moral corruption before His righteous judgment manifests in full. Misreading what the Bible says about the “end times” sends “Bible prophecy experts” scrambling to forcibly fit world events to point to the “end of the world.” Misjudging God’s plans for humanity causes many believers to mistrust the Bible, others overlook the mistakes of “experts” and wait for their next book about the “end times;” then the next and the next, hoping some day they will hit the bull’s eye. Believers in Christ must question what Christians were thinking that they did not understand the cultural times, which led them to First World War, then the Second World War. Are Christians better off now than those of the World War generations? Or are most ignoring the symptoms and causes that lead to the judgment of nations for a reset of societies to build a better world?

The specter of WWIII is real, not only because the world has mentally deranged leaders, and vultures that prey on the wealth of the nations. God, who judicially sanctioned the immoral cultural behavior of Noah’s generation, Sodom and Gomorrah, Old Egypt, and the nations that were dispossessed of their land given to old Israel, were severely judged for abandoning God’s moral law, this has not changed. God is the Sovereign Ruler of the nations, and His ethics are non-negotiable, what that means is that he is in control of history and not man. The God of the Bible is the ultimate source of power, and authority. Erroneously, men think they are.

Christ’s Resurrection reminds us that the earth and the universe are under God’s sole authority. Consider the following Scriptures:

“The Lord has established his throne in the heavens, and his kingdom rules over all.” (Psalm 103:19)

“‘Ah, Lord God! It is you who have made the heavens and the earth by your great power and by your outstretched arm! Nothing is too hard for you.” (Jeremiah 32:17)

“Oh, the depth of the riches and wisdom and knowledge of God! How unsearchable are his judgments and how inscrutable his ways!” (Romans 11:33)

If it is not up to God, then who determines if we will see that destruction? Non-believers in God are always doomed to act wrong and have bad outcomes. Believers In God bear the greatest responsibility for what happens in the world; if they misinterpret God’s will, it’s never God’s fault. If we want to understand everything that unfolds before us, it is only the Bible that reveals the perfect blueprint for restoring all things under God’s government and Christ is our example to follow.

“For it is time for judgment to begin at the household of God; and if it begins with us, what will be the outcome for those who do not obey the gospel of God?” (1 Peter 4:17)

Bible believers must lead in all areas of society and show people the way out of cultural darkness, failure to do so will have detrimental consequences like a WWIII. It is up to God’s people to determine this.