The Real Cause of Lawlessness in America

“For we must all appear before the judgment seat of Christ,
so that each one may receive what is due for what he has done in the body,
whether good or evil.”
(2 Corinthians 5:10)

When a visiting Marxist economist from China at Fulbright Fellowship was asked if he had learned anything that was surprising or unexpected of our country. Without hesitation he said “Yes, I had no idea how critical religion is to the functioning of democracy…”

In other words, the reason democracy works is not because of the government overseeing what everyone is doing but because of the decision of most people, most of the time voluntarily choosing to obey the law. In America, this is the culture embedded into the American way of life. Sadly, this is quickly disappearing.

To determine the real cause of lawlessness we have to start with the reality of the condition of the human nature. The Bible is unmistakably clear about human nature. There is no question; all people are sinners. There is not a single exception according to Scripture. Every person is born in sin. Romans 3:23 “for all have sinned and fall short of the glory of God.”

The observation from this Marxist gentleman is of great value because he is an outsider, from an opposing ideology to ours, who is looking in and making this comment. Alexis de Tocqueville, a French aristocrat, diplomat, political scientist, upon his visit to America also made this observation in reference to the vital role religion played here in his notable work: Democracy in America (1835). 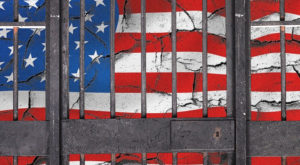 Personal accountability before God was something the early settlers and our Founding Fathers emphasized greatly because they knew what the Bible teaches about how bad the sinful nature of humans is and that no amount of laws can restrain the heart which refuses to discipline itself before God. This brings us to pinpoint the real cause for the lawlessness in America; it is because too many people are choosing to not obey God or the law and see other human beings as either enemies or they feel entitled to take what belongs to others.

In America we followed these rules because we came to believe that we aren’t just accountable to society, we are accountable to God just like Romans 14:12 says, “So then each of us will give an account of himself to God.” This is also reiterated in 2 Corinthians 5:10 “For we must all appear before the judgment seat of Christ, so that each one may receive what is due for what he has done in the body, whether good or evil.”

In the lives of too many Americans God is no longer respected and therefore has lost influence over their lives. No matter how much people refuse to respect God and break all his rules, that doesn’t change the rules for right living and God isn’t going anywhere. He is still God and will act accordingly.

At this juncture in America, we don’t need to question what is clearly manifesting before our eyes. We are seeing the lawlessness in plain sight and even being broadcasted on national TV every single day. Where is this going to take us? It is going to drive us right into the ground and ruin us as a nation. Galatians 6:7-9 warns: “Do not be deceived: God is not mocked, for whatever one sows, that will he also reap.”

Because of the sins of a people and a corrupted government God will have to allow our society to collapse. Nothing short of a general reformation can give us hope for law and order to be restored.

Only when a people and their government work for truth and virtue to prevail can there be any hope of survival and avoiding chaos.

We have allowed prosperity and liberty to be squandered and in arrogance before God we have let an entitlement mentality corrupt us and the life we were given as if we had created it ourselves. We have undervalued our blessings and given into following every lust known to humans, yet still think we can say ‘God bless America’! Upon what basis do we feel we have the right to say this?

Our course of action is very obvious. Let us acknowledge before God that we have forsaken him and have become a very sinful nation. We have become rebellious against our Creator and are in danger of his full wrath. Our very own government is turning against us and plundering us on every front. Our rulers are robbing us blind, seizing power over us and choking the life out of us because we have allowed it.

We have persisted in our sins in spite of knowing better and God has to leave us up to our own devices because we have been chasing him out of our national life. And now Romans 1:18-24, 28 is coming to pass that says, “For the wrath of God is revealed from heaven against all ungodliness and unrighteousness of men, who by their unrighteousness suppress the truth. For what can be known about God is plain to them, because God has shown it to them. For his invisible attributes, namely, his eternal power and divine nature, have been clearly perceived, ever since the creation of the world, in the things that have been made. So they are without excuse. For although they knew God, they did not honor him as God or give thanks to him, but they became futile in their thinking, and their foolish hearts were darkened. Claiming to be wise, they became fools, and exchanged the glory of the immortal God for images resembling mortal man and birds and animals and creeping things. Therefore God gave them up in the lusts of their hearts to impurity…And since they did not see fit to acknowledge God, God gave them up to a debased mind to do what ought not to be done.”

Unless we give God his rightful place in our hearts once again, there is no hope for a better tomorrow. When people walk away from God, it never goes well.

The real cause of lawlessness in America is because we have rebelled against God. Although we retain the outward profession of trust in him, our hearts are far from him. We have neglected … the glorious Gospel of our Lord Jesus Christ and His holy commands and institutions …

We in America today would do well to heed an urgent call to repentance for restoration. Let us repent and seek God earnestly. Let us amend our ways and reform everything that has been offending Almighty God and seek his mercy and forgiveness to be delivered from sin and inevitable destruction. The hour is late. We must purge ourselves from sin!

Only then will the Lord be our refuge and our strength, a very present help in trouble, and we will have no reason to be afraid, though thousands of enemies set themselves against.