The Thought Police Want to Control Our Minds

“For the weapons of our warfare are not of the flesh but have divine power to destroy strongholds. We destroy arguments and every lofty opinion raised against the knowledge of God, and take every thought captive to obey Christ.”
(2 Corinthians 10:4-5)

Every human being is engaged in a warfare. It is not a warfare of physical deadly weapons. It is the battle of the mind which makes it spiritual. Christians are especially targeted in this warfare by our enemy that is in it to win it at all costs. There is nothing light or superficial about this battlefield. This means that for the true child of God, every thought must be submitted to the obedience of Christ, just like Jesus did.

The power of thought is what leads to all action. It begins with an intention of the heart, which presents it to the mind, the mind conceives and elaborates that thought, and in time, it becomes action. “For as he thinks in his heart, so is he” (Proverbs 23:7).

This is great if it is a good thought and intention because that will guide it to a good place. But if the thought is an evil one, it will only lead to destruction of the individual and will spill over into his surroundings and eventually into society, which affects all of us. 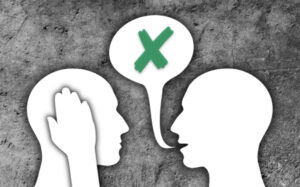 The God-haters are always looking for ways on how to fight against God because they want to be gods. The 20th and 21st centuries have been especially against God, and we are living the impact of what that has accomplished. In America, since we were founded on biblical principles and the majority of its citizens believes in the God of the Bible, those who are against God in the past have had to be very subtle in their fight to introduce their ideas into our culture. But as we have seen, that is no longer the case. Their fight against God and all of us who believe in him is blatant and completely out in the open. The God-haters are no longer hiding to implement their godless agenda. They are throwing it in our face and are not in the least bit apologetic about it. On the contrary, the audacity is very bold.

It has always been an important thing to those with hunger for power as to who is going to control our minds.

Proverbs 16:32 says that he that rules his mind is greater than he that takes a city. Most people of all ages spend a lot of time alone, so your mind is your only companion. What do you think about. What do you say to yourself? Do you just let your mind roam and think whatever it wants to, or do you direct it in the way you want. Everything we see and hear impacts us either positively or negatively. The value system and the truth we have stored in our minds is our filter. Isaiah 26:3 says, “You keep him in perfect peace whose mind is stayed on you, because he trusts in you.” Do you make it a point to keep your mind on God’s thoughts about everything or do you accept the influence of thoughts that God can never approve?

We must know how our mind works naturally. In Romans 8:7 says, “For the mind that is set on the flesh is hostile to God, for it does not submit to God’s law; indeed, it cannot.” Because of our sinful nature this is the way our minds work if left alone without deliberate guidance on our part. Our sinful mind is blinded by the devil and makes our mind an enemy of God. Colossians 1:21 says, “…you, who once were alienated and hostile in mind, doing evil deeds…” This is how we live until we invite Christ to come in and open our eyes and takeover every part of our being by his Holy Spirit.

We are not to be double-minded. James 1:8 says, “a double-minded man, unstable in all his ways.” We must decide who is going to control our minds.

Nowadays, there is an onslaught to confuse our minds about everything so we can be controlled by those who aggressively want to control us to serve their greedy, selfish, and evil purposes. We are in an all-out war for the battle to control our minds. False concepts and ideas have been repeated over and over again until people who are lazy and negligent to guard and direct their minds, think that what they are hearing is truth or the way things are even if those ideas say the opposite of what truth is.

There is a myriad of thoughts, concepts and values that have been turned on their head that people are now believing those are true and that’s the way things are. Some of those wrong things we are hearing is that the wealth must be redistributed. They say those who have earned their wealth do not have a right to it and have to give it away to those who are less fortunate or have just been plain lazy to earn their own wealth. We are being told that men can be women, and women can be men. Even so-called Christians have been convinced that “marriage” between people of the same sex should now be accepted, promoted, and celebrated. The lie was sold to our society many decades ago that life in the womb is no life at all and can be disposed of as a result over 66 million unborn children have been massacred in their mother’s womb in the past fifty years. The womb is the place where a child should feel the safest.

We are now being told what we can say or not say. Everything and everyone are being censored by the thought police, and people are paying severe consequences for upholding their beliefs, especially if they come from the Bible. It’s all about control.

The good part is that only you have the control of your minds and its thoughts, and no one can ever take that away from you unless you surrender that right and privilege.

Keep your mind stayed on the Lord, trust him, and him alone for your truth. He that rules his mind is greater than the most powerful.