Those That Give Up Freedom for Safety Deserve Neither

“Those that give up freedom for safety deserve neither.”
~Benjamin Franklin~

It is more than obvious that this famous Benjamin Franklin quote has lost its meaning in the 21st century. Franklin said: “Those who would give up essential Liberty, to purchase a little temporary Safety, deserve neither Liberty nor Safety.”

There is no doubt that the original design of a Constitutional Republic of the United States of America no longer exists. It has evolved into a democracy and an oligarchy which is now threatening to become a dictatorship from the way things are going.

The following quote is attributed to a Scottish man by the name of Alexander Fraser Tyler who said:

“A democracy cannot exist as a permanent form of government. It can only exist until the voters discover that they can vote themselves largesse from the public treasury. From that moment on, the majority always votes for the candidates promising the most benefits from the public treasury with the result that a democracy always collapses over loose fiscal policy, always followed by a dictatorship.”

The importance of this quote is the undeniable historical accuracy of its content.

Historically, people demand security from those in civil government not knowing it leads to slavery. The truth is that the outcome of a nation falls upon the citizen’s understanding of self-government and the source of all forms of government that leads to liberty with responsibility for everything they do.

“For the good of all” and “for the good of the nation” is a well worn-out statement that pays off for those who aspire to government positions to prey on people’s ignorance. Why does a generation choose security over liberty? The answer is a no-brainer: they make this choice not knowing the horrible consequences that await them thinking the pseudo-intellectuals and dishonest politicians know better than anyone else how to lead society to greater stability and progress. 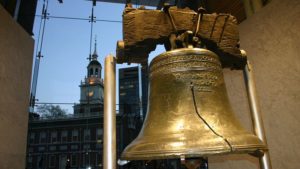 The United States of America is said to be the freest country in the world: do you know how many federal crimes are on her books that pass as law? Do you also know how many thousands of federal administrative regulations there are? Do you know how many local governments there are? Do you know how many hundreds of thousands of elected officials run those local governments? Do you know how strictly the state and federal levels govern our lives? Take a guess at how many laws hang over our heads, one, five, ten, twenty-five, thirty-five or over 45 million? If you guessed the latter, you are closer to the truth. And guess what; they continue to grow. Why do we need millions of laws, and do they increase our liberties, or do they have the opposite effect of shrinking them? At this pace how close do you think we are to a dictatorship form of government in the United States of America?

The irony of all this comes from those who affirm that the laws of God are too legalistic or oppressive. Even worse are those who deny the relevance of God’s moral law for an everlasting personal and social life; whether they are aware of this or not they continue to accept the laws of man that have proven to overburden people and destroy nations.

Those who deny the existence of God have only one basis for their argument for things to get better; it is the humanist form of government that falsely promises security, prosperity, and paradise on earth. Humanists can never deliver such promise for the “good of all” and the “good of the nation.” What a coincidence that through their policies the ones who always benefit and enrich from oppressing and exploiting the productive class are the governing elites, their family, friends, and those whom they want to favor.

By using critical thinking, we can wisely answer the next question. Which laws are easier and most beneficial for our lives to develop a stable society, the millions of man-made laws or the Ten Commandments given by the Creator of the universe?

To be under God’s form of government, whether on a personal or national level, is to be protected and to benefit from true liberty. Rejecting God’s form of government is a guarantee to be manipulated by deception and corruption, which inevitably leads to loss of freedom. Those who reject God’s will, for the present and future generations, have no other choice but to accept the limited earthly twisted plans humans come up with.

Thomas Jefferson’s warning makes all the sense in the world and it’s true: “Freedom is not free; the price you must pay for freedom is eternal vigilance.”

How long are people going to believe the lies that the Founding Founders were against God and wanted a secular tyrannical form of government? It is time to retake the unaltered history of biblical Christian America and learn about the founder’s steadfast belief in God’s Sovereignty and Providence. James Madison, the fourth U.S. President, and signer of the Constitution, sums up what the founder’s convictions were: “Before any man can be considered as a member of civil society, he must be considered as a subject of the Governor of the Universe.”

If you read Psalms 119 and then study it line upon line, you will experience the meaning of liberty. The opening eight verses of this Psalm say:

“Happy are those whose lives are faultless, who live according to the law of the Lord. Happy are those who follow his commands, who obey him with all their heart. They never do wrong; they walk in the Lord’s ways. Lord, you have given us your laws and told us to obey them faithfully. How I hope that I shall be faithful in keeping your instructions! If I pay attention to all your commands, then I will not be put to shame. As I learn your righteous judgments, I will praise you with a pure heart. I will obey your laws; never abandon me!” (Psalms 119:1-8)

The moral law of God is the source of our liberty and security; nothing else can compare. Two thousand years ago James wrote a letter confirming not just Psalms 119, but all the counsel of God’s revealed truth:

“But the one who looks into the perfect law, the law of liberty, and perseveres, being no hearer who forgets but a doer who acts, he will be blessed in his doing.” (James 1:25)

The well-being of the nation is in the hands of committed biblical Christians to engage with knowledge, understanding, wisdom, boldness and never silent in the face of evil manifested in all culture. The cultural war is not just for the few but also for everyone that loves the living God and the resurrected Jesus Christ, after all, they have never been defeated nor can they ever be defeated.

Believe it or not, Christians are aware that the Bible does have all the answers to the perplexing problems this nation faces. There is no other document or blueprint for building the proper civilization other than the Bible.