“You will know the truth, and the truth will set you free.”

You and I are in a culture clash war. These are dark times. People don’t know if they are coming or going. What is desperately needed is the light of truth to shine in these dark days so we can find our way back to a life that makes sense. It is not your truth or my truth but God’s truth that counts. Only his ways can get us back on track like they did at the beginning of our nation.

The sinful human nature is constantly looking to see if it can shake God off and do its own thing. Trouble is that man’s ways always lead to destruction and that is what we are experiencing with the breakdown of America. 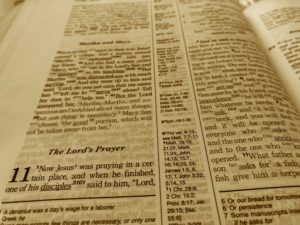 Too many Americans quit defending American values a long time ago and now we are fighting for our very existence. We have lost sight of God’s truth. The result is major fissures in our culture have developed and caused great divisions among us some of which are non-negotiable like defending our religious liberty. Our spiritual matters are non-negotiable and are between us and God. Neither government or anyone else has jurisdiction in our beliefs as long as our beliefs are not violent, evil or hurting others.

Our conscience must be free to worship and serve our Lord. Nothing is more important than that.

Defending life at all stages from the womb to the grave in natural death is also non-negotiable. Life is sacred and must be protected and defended at all cost. Humans do not give life; therefore, humans cannot take it away. God makes it very clear that he will demand account for the shedding of innocent blood. Genesis 9:5-6 “And for your lifeblood I will require a reckoning: from every beast I will require it and from man. From his fellow I will require a reckoning for the life of man. Whoever sheds the blood of man, by man shall his blood be shed, for God made man in his own image.” Killing innocent lives is non-negotiable, we must never intentionally kill innocent people. The death penalty for criminals is a totally different thing. So is the loss of life in a war situation.

The foundation of civilization is marriage and family according to the way God instituted them. Marriage and family must be defended, not destroyed, redefined or ignored. This is crucial and basic for the perpetuity of the human race. The human race is known to self-destruct which is why God has to step in with his judgments and bring order in once again to give us a reset. Believe it or not, his judgments are his grace manifested, otherwise he could just let us go until we destroy ourselves.

Sexuality and gender are another non-negotiable issue. The brainwashing that is going on in our culture in regard to gender is bordering on ridiculously insane behavior. Biology will never uphold anything else except that there are only two genders in the human race, male and female. So enough with all the ridiculousness of inventing genders. Just be more honest and admit that you are promiscuous and degenerate rather than to try to justify it and to get the rest of society to accept it by jamming it down our throats just so you can appease your guilty conscience. That conscience is God telling you, you are going the wrong way in life.

This is a critical time in the history of the world, lines are clearly drawn. And at the heart of the issue is not politics or plagues and pandemics or a shaky economy, it is the war for TRUTH. We’ve lost sight of it because we have pushed God aside who is the truth. The idea that we could create and sustain life and this country by no longer having to rely on God and his truth began to circulate and grow over the last 190 years beginning after the Second Great Awakening of 1830-40. It fomented an alternate worldview and began to supplant the biblical worldview big time. Shortly after the 1830’s and 40’s, in 1859 Charles Darwin published his “On the origin of Species” which introduced the fundamentals for the Theory of Evolution and the institutions of higher learning adopted it and slowly worked out the foundational biblical worldview and substituted it with the theory of evolution, which is what is taught today.

Too many Americans have turned their back on God and no longer want to defend his values in American culture, which is what gave us our stability. The opposite is the strategy believers in God are supposed to follow to combat worldly culture and not let it take over.

The power of the Gospel is what gave America its greatness and guided our way of life.

Instead, we have done what Romans 1:18 says and have “suppressed the truth” and we lost our way. We changed our incorruptible God and place our faith on corruptible men. God has no choice but to give us up to a depraved mind filled with unbridled passions with all kinds of vile impurities and lusts of the heart.

So now, whether we want to acknowledge it or not, America has become a reproach to the God of the Bible. To reverse this, we must engage in obvious fights to defend God’s truth once again. We must unmask and reject the lies at home, school, family, church, commerce, government, entertainment, art, etc.

Let us bring God and his truth to the forefront so he can help us combat the darkness of lies and the culture of death that has blanketed our nation. God always claims his rightful place at the helm of the universe and all of his creation. His truth never dies, and he judges us by it. That is the standard for all things. Let’s stop fighting God by putting his absolute truth in action in 2021.

There’s no need for confusion we have a roadmap to lead us along in this cultural war.

Let’s acknowledge, once and for all, that politics won’t save us, scientific and technological discoveries are mere tools. Our world needs God and his Truth! This starts with the people of God living out his Word in all areas of life. Let’s take back what we surrendered to the enemy and give God his rightful place and his glory in our lives.