The Return of Prodigal America

The nation of the United States of America has been a wonderful gift to the world since from it has flowed the Word of God to many nations of the world. However, it is undeniable that America’s light has grown dim and desperately needs to be reignited again, not for the glory of America but for the glory of God.

Of all the countries in the world I could have been born in I am so grateful that I was born in the United States of America. But not for the reasons you may think. Yes, we do enjoy lots of privileges in America and I am appreciative. BUT what I feel most greatly blessed to have been born here not because history shows that America became the most powerful and prosperous nation in all human history. To me, the greatest blessing of being born in America is because it introduced my parents to Christ, whom they both embraced wholeheartedly, and they introduced my siblings and me to him and the precious word of God. My parents exemplified the life of Jesus as best they could and that life lesson is ingrained in all our hearts to the degree that out of a family of twelve, eleven of us have also embraced Jesus as our Lord and Savior.

God in my life is the greatest treasure I could ever have no matter my other circumstances.

What is a prodigal? Let’s look at that definition first so we know what we are talking about. 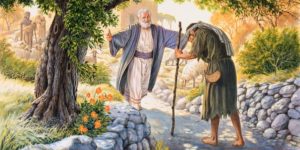 A prodigal is a person who is wasteful of his or her money, and possessions. Not only wastefully but recklessly and extravagant. One who has squandered his inheritance on lavish or profuse living and spending. A prodigal spends money or resources without care or restraint.

You might ask, how has America become a Prodigal?

Regarding the biblical teaching on this, to be a prodigal you first had to be in a place of right relationship with our heavenly Father. America’s true heritage is that it was birthed on godly/biblical principles. Was it ever faultless and perfectly aligned with God? The answer is no. But there was enough of God in America that God could bless, and he did, in a great and powerful way. I must point out that America’s greatest blessing was not the prosperity that came as a byproduct of implementing God’s principles in our spiritual life and community living. What brought the greatest blessing was honoring much of God’s Word that caused America to become what it did. You will notice I am speaking of America in past tense. The reason for that is that America now is not the America of the past.
Is being a prodigal a good thing? Not in the least. Prodigal has a negative connotation because any way you look at it, it implies foolishness and doom in the end.

Sadly, America has become equal to the prodigal son that we find in Jesus’s parable in Luke 15:11-24. I highly encourage you to read it slowly and learn great lessons from it.

The part of this parable that I want to emphasize is that there is also an upside to a prodigal because he is one who has returned after an absence. His acknowledgement of this is in verse 18, where he says: “I will arise and go to my father, and I will say to him, ‘Father, I have sinned against heaven and before you.’”

The original design of what later became the United States of America started out with a small band of European Christians who sailed to these shores with a vision they felt was from God since they wanted to build a colony/community that would honor God. They wanted to live in a place where they and their families could live out their faith without persecution or interference from governments. This heritage was passed on to future generations.

Without people of biblical faith there would be no America. Plain and simple. Without people of biblical faith there would be no good outcome in the American Revolution because it was the Christian pulpit and its ministers that set the spiritual and moral tone of this emerging new nation. These ministers instructed the early colonists in the ways of the Lord and that is the factor that made all the difference. The ministers not only instructed the people, but they also lead the way in picking up arms and went out to the battlefields to deliver themselves from the oppression of Britain. They led by example in every way.

If America is going to have a comeback, it is the ministers, along with every Bible believing Christian in America to get in the fight to gain our freedom back from this oppressive government of our own making. Just like the Christian ministers of old, it is time for Christian pastors, leaders, and family heads to call sin by its name.

We must follow the formula in 2 Chronicles 7:14. This is a must because God has not changed the principles he works by: “if my people who are called by my name humble themselves, and pray and seek my face and turn from their wicked ways, then I will hear from heaven and will forgive their sin and heal their land.”

It is not time for Christians to be calling out “peace, peace”. Rather we should be calling out, “repent, repent”. We must wholeheartedly ask God for his forgiveness, bow before him in repentance and turn from our wicked way.

It is high time that the Word of God is followed in its purity no matter who gets offended.

We have been living like the prodigal son and have been foolish, reckless, wasteful, and squandered our inheritance that was passed on to us with the blood, sweat, tears and prayers of our ancestors. Just who do we think we are? We have lied to ourselves and have become entitled with the audacity of offending Almighty God and gravely disrespecting him. Yet we constantly say, “God Bless America”! It is time for America to bless God!

What is the moral of the prodigal son parable? The upside is for prodigal America to return to God after a long absence.

It doesn’t matter how far we stray from our Heavenly Father or how much we squander the gifts he provides, he is always delighted when we turn back to him wholeheartedly. His abundant love is waiting for us to return home where he greets us with open arms like the father of the prodigal son did. When a sinner turns to God it is cause for the greatest celebration. We don’t have to worry—if there is true repentance, GOD WILL TAKE US BACK. We must show regret for our foolish behavior. This is where America needs to focus on. The sooner the better!