The Ultimate Meaning of Christmas is About Transformation

“The riches of the glory of this mystery, which is Christ in you,
the hope of glory.”
(Colossians 1:27)

The month of December is one of the most anticipated and enjoyable months of the year for various reasons but sadly for many it is not for the real meaning of what is being celebrated.

There is no doubt that all the lights, decorations, parties, gift giving, family gatherings, seasonal music, with a slight mention of the Savior of the world being born in Bethlehem are all very enjoyable activities. Not to mention that Santa Claus gets noticed much more than the Christ child. But, what about the insurmountable impact and meaning of restoration and transformation it has for all of mankind and God’s creation? That is the real reason for the celebration that gets too little attention.

On the other hand, reality also tells us that there are those who don’t get any of it at all and they are not excited in the least bit or happy about any aspect of it. Some truly despise what Christmas stands for and they are ready to do more battles aimed at dismantling this celebration. The Christ-haters will use their favorite arguments of multiculturalism as they continue to push the “political correctness” insanity that has plunged the nation into cultural, spiritual, intellectual, and emotional darkness, which is the fruit of social backwardness. Their real agenda is to make America godless and despise any mention of him whatsoever as if to say God does not exist therefore, he is not necessary. Their existence is that sad. 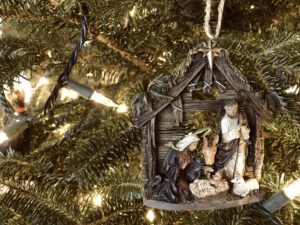 The Christian camp is not without its internal battles. There are those who go to great lengths to explain the reason Christmas is a pagan celebration. It is expected for nonbelievers to miss the great meaning of the birth of Christ but those who profess the Christian faith should not join forces in agreement with those who are clueless of such an important historical event that divides history before Christ and after Christ.

America, and the rest of the nations with Christian influence, can never expect to become great by mere human knowledge that lacks the understanding of what truly happened 2000 years ago in the town of Bethlehem in Israel.

The closer we get to the original historical events the better understanding we will have of God’s plan and its development for humanity.

When the influence of the humanists began to increase in this country, they gradually began controlling public education early in the 20th century, and we must admit they have been masterfully successful at rewriting the original history of this nation. This is the reason that our present generations, for the most part, are misguided when it comes to understanding the real reason for Christmas. The first and second generation, after the birth of this new nation, were well aware of the link between America and Jesus Christ. They were taught of the spiritual purpose of the Pilgrims and Puritans to come to these lands to establish colonies where they could freely practice their faith in the God of the Bible and follow the life plan that the Holy Scriptures gives us.

John Quincy Adams (1767– 1848) was the son of Founding Father John Adams (1735-1826) and our second president and also among the five chosen to draft the Declaration of Independence. Quincy Adams became the sixth president of the United States. John Jr. had a remarkable life, at the age of 14 he was appointed to a diplomatic position by Congress as secretary to the ambassador at the court of Catherine the Great in Russia. He also served as ambassador to England, France, Holland, Prussia, and Russia. He was Secretary of State, U.S. Senator, and President of the United States. His wife: Louisa Catherine was the First Lady of the United States that was born outside of the U.S. He also fiercely fought against slavery by promoting its abolition.

Let us pay attention to his understanding of the meaning of Americanism in relation to Jesus Christ because this is what Americans were taught in society and in school:

The birthday of America as a nation “is indissolubly linked with the birthday of the Savior.” John Quincy Adams expressed the truth that up until his generation they had known this truth and challenged us not to think of America’s greatness apart from the purpose of Christ’s birth. The same is true for the entire world. Nothing good gets accomplished in the world that is not guided by the hand of God. Jesus came to bring God’s message for transformation to his ultimate plan for all of humankind.

God had announced through the prophet Isaiah the coming of the Messiah who would come to transform all of creation and rule it forevermore. Isaiah 9:6-7 “For to us a child is born, to us a son is given; and the government shall be upon his shoulder, and his name shall be called Wonderful Counselor, Mighty God, Everlasting Father, Prince of Peace. Of the increase of his government and of peace there will be no end, on the throne of David and over his kingdom, to establish it and to uphold it with justice and with righteousness from this time forth and forevermore. The zeal of the Lord of hosts will do this.”

In the annunciation of the Angel to Mary (Luke 1:26-38), she was told that she would birth a child who would be the Messiah and describes his mission: “And the angel said to her, ‘Do not be afraid, Mary, for you have found favor with God. And behold, you will conceive…a son, and you shall call his name Jesus. He will be great and will be called the Son of the Most High. And the Lord God will give to him the throne of his father David, and he will reign…forever, and of his kingdom there will be no end.’”

Without the solid foundation provided by the biblical principles America would never have existed. And at present, without the transforming power of the Christmas child there is no bailout for this cultural madness. We must keep focusing on our biblical faith both personally and nationally.

Faith in Jesus should always prevail throughout the earth.

May all the Christmas lights, trees, songs, and music be a reminder to every follower of Christ that His birth is about the vital transformation of individuals, which begins by accepting God’s gift of salvation – redemption. Only in him is there real hope. Above all, let us never lose sight that genuine and lasting cultural transformation begins with the spiritual transformation of the individual.

“You are the light of the world. A city set on a hill cannot be hidden. Nor do people light a lamp and put it under a basket, but on a stand, and it gives light to all in the house. In the same way, let your light shine before others, so that they may see your good works and give glory to your Father who is in heaven.” (Matthew 5:14-16)