The followers of Christ have been persecuted from the beginning. Countless people have had to lay down their lives for the sake of Christ rather than deny him. All but one of Jesus’s disciples, a.k.a. apostles, became martyrs for their faith and commitment to Christ. Jesus said this was to be expected when he said, “‘A servant is not greater than his master.’ If they persecuted me, they will also persecute you” (John 15:20).

A monumental book was written by Englishman John Foxe (1516–1587) titled, Foxe’s Book of Martyrs. Next to the Bible, I would highly recommend every Christian to read this book. Every time I read it, I am in awe and highly inspired of how believers rather than deny Christ went to their death. Needless to say, when I read it, I am deeply moved even to tears and gratitude for the faithfulness of that caliber of followers of Christ that passed on to us the torch and the mantel of Christ throughout the ages. The book begins with the first Christian martyr, Stephen as recorded in the book of Acts chapter 7 and ends with the martyrs of the Protestant Reformation of the 16th century. 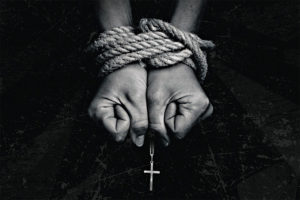 The history of the Christian church shows that persecution of Christians has been a constant. It has never let up in the world. Even today in many nations Christians are suffering and even dying for their faith. Their places of worship are burned. They are losing their businesses, their homes and even their families. Their women are raped and tortured even in front of their family members. A modern-day ministry that keeps track of this is The Voice of the Martyrs. They make sure that Christians who are arrested, interrogated, imprisoned and tortured for their faith yet remain faithful are not forgotten and they assist them in any way then can.

As you can see, persecution of Christians is nothing new. However, in America, which was birthed as a Christian nation and has established freedom of religion as one of its pillars for society, this has now changed.

We are seeing Christians, Christian thought and beliefs targeted by the God-haters in hopes to eradicate the God of the Bible and Christ from our culture. In our more modern era, the fight against Christianity started to come on full force since the early 1960s when prayer and the Bible were banned from public schools. From that point on we felt the impact and statistics that had pretty much held steady on out-of-wedlock pregnancies, violent crime and delinquency, started to climb. We began down a slippery slope of immorality in every way in our society that has only incremented. Without the deterrent of God and his Word to keep people in check and responsible before him of their lives, actions and lifestyles that we knew were wrong began to be more “acceptable” in our society.

Needless to say, the disrespect for the Creator and the order of life he has established has been mocked and trashed. The worst part is that mainline churches began to cave to the pressures of this immorality and somehow have dishonestly found a way to embrace and try to justify this godlessness with biblical doctrine which of course is impossible because “oil and water” never mix so they end up only deceiving themselves and robbing the Gospel of its unmatched power.

As a result, the mockery against Christianity is the result of anyone who identifies with Christ. The general consensus is that persecution of Christians only happened in faraway countries but now we are seeing Christian persecution right here at home. Committed Christians are facing increasing intolerance in this country. We see it through fines, lawsuits, jobs lost, and the public disdain.

There is persecution in politics. Christian politicians seem to be the most attacked for their religious beliefs. They are subjected to rigorous scrutiny if they dare to voice their Christian values in their campaigns and on the job. They try to cast doubt on their ability to serve in public office because of their Christianity. Our Pledge of Allegiance has been repeatedly brought up saying that “under God” needs to be taken out from its text. Even our currency has been brought into question, because it has “in God we trust” written on it.

Anyone with traditional biblical beliefs that have been part of our country for years are labeled as close minded and prejudiced against all other beliefs.

In business, Christians are targeted. If Christian bakers refuse to bake cakes for same-sex weddings, or those in public office are refusing to authorize same-sex wedding certificates they are ostracized and their lives and livelihood is destroyed.

There is great Christian persecution in our college and university campuses. All beliefs and values are fair game except Christian values. The beliefs of Christian students are severely judged, yet everyone else can say whatever they want without question. Christian colleges sometimes find themselves in danger of losing their accreditation because they won’t conform to godless ideology. Censoring Christian thought only lets ignorance reign supreme and these institutions are only unleashing idiots with a college degree into society to create havoc.

Persecution against Christianity is unavoidable. We have had to deal with it for 2000 years and counting. Only our reaction to persecution should be like Jesus and the early Christians dealt with it. Let’s live in the power of the gospel. Remember, “For we do not wrestle against flesh and blood, but against the rulers, against the authorities, against the cosmic powers over this present darkness, against the spiritual forces of evil in the heavenly places” (Ephesians 6:12).  Let us thrive in the midst of persecution. We are different than anyone else in the world, let’s live in that power we have been granted. When you are different you tend to get judged. Never compromise God’s truth.