Fathers have gotten a bad rap in our society for the last few decades, and we are now paying a high price for having gone that route.

It seems like more and more fathers continue to lose ground in our culture and the leftist ideology, radical feminism and the government have been a huge culprit in the demise of the traditional family. Most importantly, this ideology was also allowed to penetrate modern Christianity with most Bible seminaries, which produce the pastors in most of the nominal denominations of Christianity, espouse humanism above solid biblical teaching. Leftist “modern” views of the family are not good news for fathers, mothers, children, communities, or the nation. But by far fathers have especially gotten the worst brunt of these devastating shifts in our culture. This is not a recent thing. I would venture to say since after WWII, fatherhood began to suffer this demeaning attack. In the 1950s and 60s some family friendly TV shows and sitcoms worked hard to nurture the family unit with traditional values. Shows and sitcoms like The Adventures of Ozzie and Harriet (running from 1952 to 1966) and Father Knows Best (1954-1960), followed by My Three Sons (1960-1972). But any mention of those productions nowadays is mostly mentioned in a derogatory manner, further proving how far we have drifted down the slippery slope and the dismantling of the traditional family.

In an article the Washington Examiner reports the following:

“Not only are married fathers proven to help their own children achieve higher levels of education, get better jobs, and earn more income, but neighborhoods with more fathers in them have proven to have more upward social mobility than those neighborhoods dominated by single mothers.

“Neighborhoods with more fathers are also safer than neighborhoods without them. Families with fathers appear to help establish a climate of order that makes entire communities less violent.

“That’s right — just the mere presence of more fathers in a neighborhood helps all children in the neighborhood.” 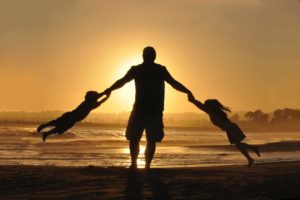 Here is a recent example which proves this statement by the Washington Examiner about the importance of fathers.
Southwood High School in Louisiana had a lot of problems with student-on-student violence but found out that father figures can make all the difference through a program called “Dads On Duty”.

In just three days’ time, twenty-three students were arrested for fighting but then something unusual happened and there hasn’t been another incident since due to a crisis intervention team of about forty Southwood dads who decided to do something about all this violence. They have not studied school counseling, or criminal justice or anything else that would qualify them in the eyes of society to step in this role. Their only qualifications are that they are all dads. They decided that the best people who can take care of their kids are them. So, they took it upon themselves to organize and started “Dads on Duty” who now hang out at the school in shifts. Any wrong attitude must be met with good parenting from these dads.

Lo and behold! Some of the comments from the students themselves is that they immediately felt a form of safety. There was no more fighting. Students started going to class. Many times, just by getting a look from one or more of the dads that had enough power to change the behavior of the students. And it is not just by stern looks or warnings but also the students mentioned the “Dad” jokes. The Dads took time to also jest with the students therefore breaking the ice. The students put embarrassment aside that dads would come on campus and gladly received the perfect mix of tough love and gentle support. This has helped transform this school.

The students say the school is experiencing a happiness that they can feel. This is why the dads plan to keep coming to Southwood indefinitely. These dads know that not all the students have a father figure at home or a male figure for that matter. So, they say just to be there made a big difference.

Statistics show that most males in prison for violent crimes grew up without a father.

I was greatly encouraged by the initiative of these forty fathers at Southwood High School and I pray that other fathers across this country learn from this and also take the initiative to be more involved in the upbringing of their children. It is high time that we stop undermining the role of the men in our society. We need them.

“Train up a child in the way he should go;
even when he is old he will not depart from it”.
(Proverbs 22:6)