“Life and death are in the power of the tongue, and those who love it will eat its fruit.”

Just because we have the capacity to emit words, no one is allowed to indefinitely let words just fall out of their mouths without being held accountable. Jesus tells us this very clearly in Matthew 12:36-37, “But I tell you that men will give an account on the day of judgment for every careless word they have spoken. For by your words you will be justified, and by your words you will be condemned.” Needless to say, it is undeniable that words have power! They can be used to create, build up or tear down and destroy.

Not a day goes by that the assault on free speech becomes more and more evident by those big-tech platforms that can wield their power to bring others to submission simply because they have a different opinion. That has never been the American way and if feels very communist/Marxist as history clearly shows.

Some of the first signs of a Marxist regime is to disarm the citizenry and to silence dissenters through very harsh, critical and even life-threatening means. Did we ever even imagine we would see this in America? Never! Especially not in our lifetime. Yet here we are in what almost seems like an “overnight” takeover of our media and high-tech means of communication. Which I must say, that is where people live these days for just about everything; banking, education, shopping, work, blogging, publishing, messaging, you name it. We have become so dependent on these technologies that it is very difficult to imagine life without them. 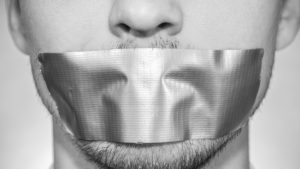 The Republic of the United States of America has long been known as the freest nation in all of human history and free speech is its pride and joy. But as of a couple of decades we have witnessed a major shift and now, it is in full bloom. The shift is repression and suppression of thoughts and impulses that conflict with conventional standards of conduct according to the biased agendas of the leftist mindset that have become widespread in our beloved country. Strategically, these individuals happen to be in control of the mainstream media, high-tech platforms, Hollywood, and now even in government. The cancel culture crowd has made a major, bold and aggressive move to takeover America. We have lost truth and honesty from sight temporarily. I say temporarily because true blooded Americans are not going to stand for it under no circumstances even if it means following in the footsteps of the Founders who laid down “their lives, their wealth and their sacred honor” to create this country and we must claim back our heritage.

In America today, the right to express one’s opinion is greatly threatened not only by activists and big-tech industries but also by authorities, institutions and society as a whole. How many people have already lost their jobs just because of something they said that was deemed offensive, insensitive or judged as being prejudicial when it was nothing of the kind? In school, children are being signaled out, ostracized or even expelled for something they said or did or maybe even their parents expressed something that the school deems unacceptable. We are living a serious free speech crisis in America the likes we have never seen before and this should be of great concern.

There is a special attack on conservative and godly expression. The fight is even against God’s truth. So, if the fight is against God’s truth, whose truth is reigning supreme? It is faulty, sinful people pushing their perverted, contaminated reasoning upon all of us. It is interesting that God or his Word are censored from public life and government institutions, but movies, music, pornography and permissive culture can get away with such foul language and perversion which is considered modernity and change of the times and covered by free speech regardless of what this messaging produces. People who object to the widespread immorality through these means are looked upon as old-fashioned prudes, religious fanatics and just plain backward folks.

Needless to say, the agenda behind the assault on free speech is sinister and evil. We cannot live without truth, especially God’s truth, and will fight to defend it at all cost. We dare not lose by default. For God and country, let’s fight!