Is Humanity Headed in the Right Direction?

As we take a panoramic view of the world we can hardly say that humanity is headed in the right direction. The opposite is true, it’s obvious as each day passes that humanity increases its destruction.

This destruction is the result of the myriad of beliefs that people embrace. An example of that is what we are witnessing with the increased strength of Islamism, whose own declarations have revealed, it is determined to spread Islam throughout the world.

Communist China is increasingly gaining and playing an important role on the world stage. We are witnessing how the Chinese government is making more and more alliances with diverse nations and becoming more audacious in spreading its tentacles. Something alarming to note is the powerful military forces it is building with its profits and technology it is acquiring. What are their intentions?

We must never forget that Atheism is a religion, even though it has proven ineffective there are those who cling to it and believe it to be the solution for the world and mankind. They have every intention of implementing it.

On the other hand, there is the resurgence of socialism in Latin America, and even the North America and other continents. Historically, Socialism has also proven its failure, yet we are seeing its resurrection in spite of its horrendous track record of destruction.

To this world panorama we must add something of great concern and that is the socially asphyxiating moral perversion that the western world is drowning in and exporting to the rest of the nations.

Included on this world canvas is the increased interest in the occult and world religions. 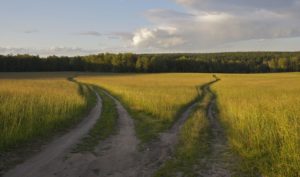 An area that is truly alarming is how liberalism has crept into the Christian church and influenced it to the degree of rendering it largely ineffective and converting it to fodder for world ridicule. The doctrinal confusion caused by the church’s refusal to accept and live by the totality of Scripture in spite of Jesus’ warning against those who would reject the absolutes of God as the final authority, presents great evidence against us for judgment. Jesus said: “‘You leave the commandment of God and hold to the tradition of men.’ And he said to them, ‘You have a fine way of rejecting the commandment of God in order to establish your tradition!’” (Mark 7:8-9).

All of humanity is desperate for a vision, not for the end of the world, but something that will give it a solid foundation to stand on and build for life.

Of the main perspectives that dominate the ideas for humanity such as: secular humanism, Marxist-Leninism, cosmic humanism, or new age, the only one that is completely correct and can offer an infallible system of ethics is the biblical perspective. God’s perspective is the only guarantee for nations to have for true freedom and progress. It is the only true guide to help us make personal, family, and professional, decisions. God’s will works because it is justice for all societies.

Biblical ethics are also what give civic justice normality, even though many Christians don’t believe they do, that doesn’t change the fact they are absolute truth. Also, many short-sighted Christians tremble at the thought that biblical ethics should dominate politics. That fear stems from the confusion and inconsistencies in doctrine. Christians are no longer taught in an absolute way that politics without biblical foundation can never produce desired results for all.

Christianity, as well as the world, needs a clear vision of the importance of the Bible in implementing civil justice. It is highly evident, by the condition of the world that we cannot continue to use reason as the only basis for interpreting life. Why? Because sin and transgression of God’s Law effects us mentally therefore impairing our capacity for discernment. Neither can we take the general consensus or majority decision as a solid foundation if it does not proceed from wisdom acceptable to God. God’s ethics are the only way to insure that decisions are not based solely on personal interests that result from selfishness.

We cannot trust the decisions of “experts” in the important areas of human development whose decisions are based on the interpretation of life from a sinful perspective. History shows it is these “experts” that have caused us so many problems because of their warped and myopic views. I insist upon declaring that doing things God’s way is the only way to arrive at sound politics.

Because God’s ways are much higher than ours, what He says and what we say about an issue can be two totally opposing views. For this reason, we must constantly meticulously verify through the grid of the Bible what it says about any given issue that requires a solution. Once the Bible reveals a clear path of action toward resolving a problem, we must decide to obey or disobey what God has said; the results will depend on this decision.

The entire Bible, the Old and New Testaments, give us an ample perspective of the character of God and His will for all areas of human development. The Apostle Paul, referring to Old Testament Scripture, said the following: “All Scripture is breathed out by God and profitable for teaching, for reproof, for correction, and for training in righteousness, that the man of God may be competent, equipped for every good work” (2 Timothy 3:16-17). The totality of the Bible is the only source that reveals how to truly do good works.

A vision for the development of social and political life that is based on supposed “neutrality”, without the influence of God, is guaranteed failure. All of the Commandments of God are designed to make a way for humankind to get out of the swamp of sinfulness and destruction it finds itself in. Only in the totality of Scripture can people of all ages and walks of life find true wisdom to make the right decisions on all subjects though the world may ridicule and scream at the top of their lungs in disapproval; the results will speak for themselves. “Blessed are those whose way is blameless, who walk in the law of the LORD!” (Psalm 119:1). All knowledge must have the Bible as its maximum authority to verify its true value. Only in its pages can we find the blueprint for rebuilding life and a world we want to live in.

Either we accept the direction of God’s leading through His Holy Word or we will have to suffer the consequences of ongoing destruction in various manifestations that are unimaginable until a generation rises that will pay closer attention to what God says and purposes in their heart to obey Him.