The Privilege of Elections

“Do not be deceived: God is not mocked, for whatever one sows,
that will he also reap.”
(Galatians 6:7)

The law of “sowing and reaping” in life is definitely about making the right choices.

Election day is almost here with early voting already underway. Like every election, each one is important in its own right and for the purpose it is needed. Every election affects the rest of the nation for better or for worse in all areas of life. The repercussions are felt for years to come.

Every professing Christian and genuine patriot should not wash his or her hands and not vote, we have a civic duty before God whether we are believers in Christ or not. There isn’t such a thing as neutrality in elections. It is a fact that, every citizen votes for the kind of nation they want.

To assure that we are creating the nation we want, we must offer an educated vote. By that I mean, we must pay attention to each candidate, who they are, and what their life values are. We must know if they are elected how they will lead us. 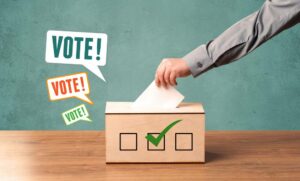 There is so much information on all of us online and in other sources that we can find out just about everything that is important about any one if we take the time to research them. Also, most of them create a website where they post their qualification/bio, the experience they have had and their stand on all the important issues that matter. We can also have access to their voting records of the past and what they have stood for.

There are also campaign speeches and debates to pay attention to. Many will garner endorsements from other known and important people who vouch for these candidates and their integrity. So, what I am saying is there is no excuse to not know who to vote for unless you really don’t care and aren’t paying attention. In that case, your vote will be a careless one and you get what you ask for. But know this, it affects all of us whoever gets elected. In that sense, we are our “brother’s keeper”.

Getting the balance right in the courts and electing the right judges greatly impacts our entire society with ripple effects for many years to come, especially if those judges are in the Supreme Court. Every concerned American needs to understand the depth of what electing and appointing judges means to us all. It determines what kind of country we are going to be. The right judges must respect God, defend life at all stages, and in the case of our country, they must uphold the Constitution and the Bill of Rights to strict interpretation because those are our official documents that are supposed to lead us. At a recent event where the slate of judges for my state were presenting themselves and asking for our vote and answering questions, I was so pleased to see that all six of them upheld these important values and they were not ashamed to declare their faith in God as well as letting us know how they would interpret the law.

There is no doubt at this point that the highest percentage of the population knows and affirms that we are going in the wrong direction; we need to know what brought us to our present condition. It has definitely been due to the country as a whole turning our back on God and emitting wrong voting and appointments of individuals that have also turned their back on God and all of our governing documents. God will not be mocked and what we reap is what we sow.

Decisions like banning prayer and Bible reading from our public schools have been detrimental with practically irreparable damage. After the June 17, 1963 ruling, the Wall Street Journal commented that atheism was now “the one belief to which the state’s power will extend its protection.”

In essence, the court’s decision gave superior status to atheism over the acceptance of the biblical God in America.

Can you, in all honesty, tell what happened to the cultural landscape of our country since then? America has had a radical decline in all areas of life and is incomparable in her history.

Another terrible seed that was sown was on June 26, 2015, when the Supreme Court ruled 5-4 that homosexual marriage is a constitutional right. Five individuals decided to go against thousands of years [since the dawn of human history] of proven science and cultural relevance of human reproduction and stable societies.

It is transcendental decisions like these that have us living life upside down and now we are reaping what we have sown.

Christians have always been the majority, and yet the decline of the nation testifies to the fact that a minority has been dominating our country. How is this possible? Three obvious facts answer that question: lack of biblical worldview, wrong biblical teachings and apathy in voting and community involvement.

Elections are not about liking a candidate, rather, it is about which candidate can we work with to return the nation back to her biblical foundation. America was never founded to be a democracy; it was founded upon the principles of God in all spheres of our nation. A democracy molds itself into a system of subordination of all the moral virtues and intellectual abilities.

The only form of government that is lasting with promising results is the government of God; it is to that end that God’s people are called to labor in each generation.

“I do not ask that you take them out of the world, but that you keep them from the evil one.” John 17:15