What Is this Mystery Called Death?

“…it is destined for people to die once, and after this comes judgment,”
(Hebrews 9:27)

What is this mystery called death? If you stop to think about it, it is a strange thing. Why do we all have to die? There are few things that we are assured of in life, and death is one of them. Sooner or later, we all have to die. Everyday people who were with us the day before may be gone the next. This is a reality we must live with. We are born to die. It is unavoidable. It is a hurtful experience to think of the departure of our loved ones, yet we are powerless to avoid it; we cannot hold on to them. When their earthly time is up the experience comes, and each one of us will have to move on into the hereafter. What happens next? Where do we go?

How did death come to us? Is death also the creation of the One who gave us life? Where did it come from? Let’s look at this from God’s perspective, but first consider the following:

Something of interest to look at are the World Birth and Death Rates:

During the time the time it takes you to read this, at the rate of 105 deaths per minute that’s how many people will have died in the world. We don’t like to talk about death, but we must not avoid the subject because death will come whether we want it to or not. We must not let it catch us unaware. According to God’s Word, going on to the afterlife requires preparation and it is something that we must do every day. Yes, you heard that right, every day we must prepare to die (John 3:1-21).

When it comes to this subject, it makes all the difference whether we believe in God or not. It is our prerogative to believe or not to believe. Some choose to believe that when death comes, they will be put in the ground and that is all there is to it; they believe that when you cease to exist that is all there is no more in the beyond. But we cannot afford to take human opinion on this because there is too much at stake and once, we pass from this earthly life, there is no opportunity to do this again and eternity will take over.

To gain true understanding about death we must consult the giver of life. So, what does God’s Word have to say about death?

The first book of the Bible is Genesis, which is the book of beginnings. In it we are told how everything began and verse one starts out by making a bold, accurate and matter-of-fact statement: “In the beginning God created the heavens and the earth” (Gen. 1:1). It took God six 24-hr days to make all things and on the seventh day, he rested. 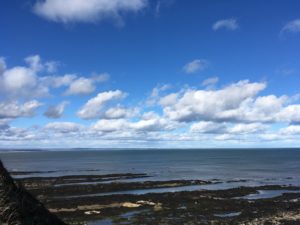 God made the first human beings on the sixth day of creation, after His likeness; they were named Adam and Eve, male and female (Genesis 1:26-28). He gave them a very specific directive: Genesis 2:15-17, “The Lord God took the man and put him in the garden of Eden to work it and keep it. And the Lord God commanded the man, saying, ‘You may surely eat of every tree of the garden, but of the tree of the knowledge of good and evil you shall not eat, for in the day that you eat of it you shall surely die.’” Adam and Eve did eat of the forbidden fruit and that is how death entered into the human chain to this day. God is not the author of physical death. Humans brought death on through disobedience. Adam and Eve felt the difference immediately after their fall (Genesis 3:7-8). Death happened just like God said it would.

You might ask, as many people do, why did God put that prohibited tree there in the first place if he knew it was going to be a temptation that was going to bring so much suffering and introduce death? That’s a very good question. But to understand it we must look at the big picture.

Before Adam and Eve disobeyed, sin had already been conceived in the universe. We are taught in the Bible that it originated in heaven when Lucifer, a perfect angel in the presence of God, corrupted himself and challenged God because he wanted to usurp God’s place. In other words, there was a coup in heaven. Many of the angelic beings corrupted themselves along with him, the number of them is “one third”. We are told Lucifer is also referred to as Satan and devil and in the book of Revelation he is also called the dragon and the ancient serpent, (Revelation 12:4, 7-9).

Satan and his followers were chased out of heaven and thrown down to earth, which is why Satan had access to the Garden of Eden where he was able to use the serpent for his purposes. From this we also learn that all the beings that God has created, both angelic and human, have a free will. We can choose to do God’s will or not along with the consequences. To defeat Satan and eradicate sin God had to prove why he alone is the Sovereign not just by his power but principally by HIS WISDOM. God had to include all of the puzzle pieces, so to speak, to triumph over this challenge that had been hurled at him and that all of the universe was waiting to see how he would respond and win, the angels that remained uncorrupted were the most observant. Now all created creatures had to choose between good and evil until God’s full plan of redemption and triumph over sin was completed, a promise he made from the very beginning and fulfilled in Christ, (Genesis 3:15).

God’s weapon of choice is his wisdom along with his power because he is not a tyrant neither is he arbitrary in any way. He can never be rightly accused of acting unjustly. God will never betray or taint himself with sin. He is perfect and ever holy in the past, present and future, he will always remain the same for there is no variability in him (James 1:17).

God never changes. In fact, given the character of God, it is impossible for God to change. The influences of change in people’s lives and the world or in the universe, for that matter, have no effect on God. His power, knowledge and wisdom never diminish. God does not compromise or change His values. And God does not have mood swings. So, when the Bible refers to emotions in relation to God, they are always justified with a very good reason and principle behind each and every one of them. Life and its uncertainties may shake you, but God–the Rock of Ages–never moves. Therefore, if we cling to Him, His strength will always sustain us (Psalms 33:11).

God’s plan is unchangeable. It existed at the beginning of creation and remains the same today. Each one of us is part of his plan! Paul explains this in Ephesians 2:10, that says, “We are God’s masterpiece. He has created us anew in Christ Jesus, so that we can do the good things He planned for us long ago”.

God’s unchangeable ways assure us of unwavering guidance, we can always fully trust him to lead us in the right path. Psalm 18:30 states, “As for God, His way is perfect. All the Lord’s promises prove true.” God’s word equips you with timeless truth, it never expires or grows old, it is ever applicable. Isaiah 40:8 declares, “The grass withers, and the flowers fade, but the word of our God stands forever.” God’s words and commands stand forever.

So, when it comes to physical death for us, learning, applying, and preparing for this transition in our lives according to what God teaches us about it is the best way to be ready when our day comes.

Sin caused Adam and Eve to see things completely different. They immediately experienced shame of their nakedness, their innocence and purity died. They also experienced guilt; they knew they had done something wrong. Sin always experiences guilt, even though hardened sinners explain it away, but it is the image of God that prompts us to let us know we have done something wrong.

In Adam and Eve’s sin we all died. Romans 5:12 “Therefore, just as sin came into the world through one man, and death through sin, and so death spread to all men because all sinned.” Romans 3:23 says, “…for all have sinned and fall short of the glory of God.”

There is no escaping to be born in sin. Every human comes into this world already being a sinner. The only way to set ourselves free is through the born-again experience through Jesus, our Redeemer. Jesus said it in, John 3:1-21, “…‘You must be born again’…”

As you can see, we must understand this threshold called death because once it happens, that is it, you can’t change anything. The Bible does not teach or support any kind of chances after physical death like reincarnation or purgatory in anyway. The Bible says: “it is appointed for man to die once, and after that comes judgment,” (Hebrews 9:27)

God takes no pleasure in seeing SINNERS die. Therefore, he has made provision so all can come to repentance and live: Romans 6:23, “For the wages of sin is death, but the free gift of God is eternal life in Christ Jesus our Lord.”

God wants people to live and continue living even when they are transitioned into the afterlife.